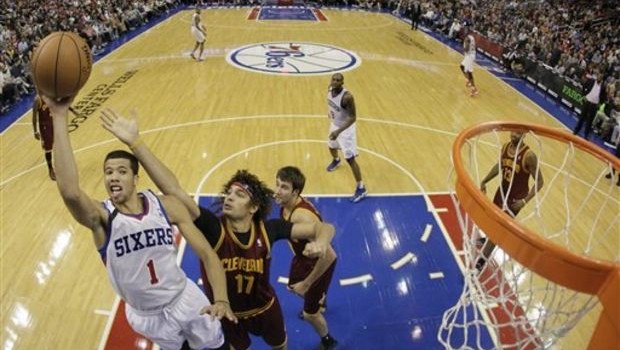 The Sixers are 4-28 and haven’t won a home game all season.

The Cavaliers are slumping badly and will be without the great LeBron James and supreme point guard Kyrie Irving.

So do not be surprised of the Sixers beat the Cavs tonight at Wells Fargo Center.

I know, I know. This girl must be crazy, you are thinking.

Vegas agrees with you. The Cavs are a 9-point favorite though some casino books have taken the game off the board.

But Sixers wins have come when the team has played exceptionally well and the opponent has a letdown.

And the Sixers are coming off a long west coast trip while the Cavs are cratering under new coach David Blatt.

With James already out and Irving now sidelined, the Cavaliers will try to avoid their sixth loss in eight games.

Cleveland has played the last four games without LeBron James, who could miss another week because of back and knee soreness, while starting center Anderson Varejao is out for the season with a torn Achilles tendon.

The Cavaliers (19-15) were hoping Irving and Kevin Love would lead the way without James. Irving, however, left in the third quarter of Sunday’s 109-90 home loss to Dallas with lower back tightness and won’t even make the trip to Philly.

”I’m in a lot of pain right now,” said the All-Star point guard, who is averaging 20.4 points and 5.2 assists. “I just have to get through it. It stinks because you have two injuries at one time.”

Irving, who also missed two games last week with a sore left knee, scored a season-low six on 2-of-9 shooting before exiting Sunday’s loss. Cleveland has struggled to stay competitive, with its last five losses coming by an average of 15.2 points.

Love could be ready to step into the primary scoring role after totaling 57 points and hitting 6 of 11 from 3-point range in two games since sitting one with back spasms. He had a season-high 30 points and 10 rebounds versus Dallas and has scored a combined 52 to go with 22 boards in his last two against the 76ers (4-28).

Love’s production might not matter unless Cleveland can play better defensively. After holding Charlotte to 36.8 percent shooting in Friday’s 91-87 win, the Cavaliers let Dallas shoot 56.4 percent – including 12 of 26 from long range.

”Certainly not good enough,” coach David Blatt said. ”The other night we played great defensively, (Sunday) we did not. We didn’t play the kind of defense we needed to play against any team, certainly not Dallas.”

Before the game, general manager David Griffin said speculation about Blatt’s job status was ”ridiculous” and said he isn’t giving the rookie head coach a vote of confidence because ”he never needed one.”

Blatt’s club should be able to make strides defensively against a Philly team that is last in the league in scoring (90.8), field-goal percentage (41.1) and 3-point shooting (29.7) while averaging an NBA-high 19.1 turnovers.

The 76ers have allowed 121.7 points per game in the past three and dropped the last five on a seven-game trip that concluded with Saturday’s 127-91 loss to the Los Angeles Clippers. They’re still seeking their first victory at Wells Fargo Center, and at 0-14 are closing in on the 1993-94 Dallas club that set a league record with 19 home losses to begin the season.

”Just because of our record, it doesn’t mean it’s a rollover,” said guard Tony Wroten, who has totaled 56 points in his last two games.”When we step on the court, we’re trying to win every game.”

Michael Carter-Williams, the only NBA player averaging at least 15 points, seven assists and six rebounds, is expected to return after resting a sore shoulder Saturday. He’s scored 23.0 per game in his last three meetings with Cleveland.