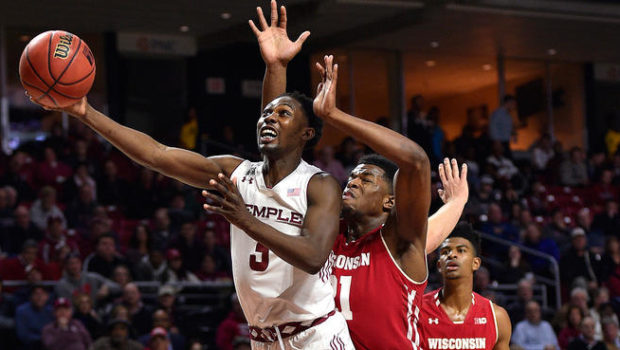 It took Temple until Dec. 5 to finally play a game in their North Broad Street campus court, Liacouris Center.

But it was worth the wait!

Ethan Happ matched a season-high with 23 points, but was held scoreless over the final 5:52 for the Badgers (4-6), who have dropped three of four.

Obi Enechionyia had 11 points, seven rebounds and four blocks for Temple (5-2), including two rejections of Happ inside over the final three minutes in Owls’ home opener.

Wisconsin didn’t score over the final 3:27.

Alston, who shot 6 of 6 from the line, has made a school-record 52 consecutive foul shots dating to last December. He drilled two with 1:09 left to put Temple ahead 57-55, and buried two more to put it away with 4.6 seconds remaining as the Owls won for the second time in four games.

“My dad preached that the most,” Alston said of his free throw shooting. “I couldn’t do anything if I didn’t learn to shoot free throws.”

“We knew were going to have to be solid for all 40 minutes. And we were pretty solid for 36 or 37,” Gard said. “This team is still growing and maturing into figuring how to finish a game out.”

The Owls, who entered 3-0 against Power 5 teams with victories over Auburn, Clemson and South Carolina, got two buckets from Quinton Rose in an 8-0 run to go ahead 47-41 with 10:47 left.

Happ responded with three inside baskets in Wisconsin’s ensuing 12-3 spurt. But Temple rallied to tie it with two minutes left after Enechionyia blocked Happ and Rose hit one of two foul shots on the next possession.

Extra free-throw shooting may be on the upcoming Temple practice schedule for everybody but Alston, who last missed at the line Dec. 28 against Cincinnati.

“The record wouldn’t have meant much if we lost,” Alston said. “I’m glad we got the win.”