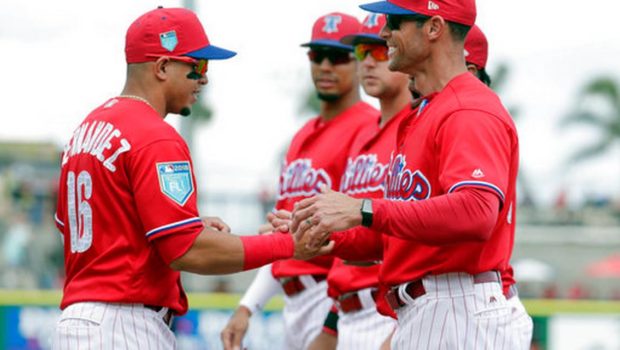 SHIFTING IN THE OUTFIELD KEY TO PHILLIES’ ANALYTICS PLANS!

The Phillies have used the Grapefruit League games to implement their aggressive outfield shifting for every batter, based on spray charts. But they will go beyond that, flipping players across the field when the numbers tell them it is wisest.

That is why Rhys Hoskins, who will move from first base to left field this season, has begun some light work in right field. The Phillies hope Hoskins can be a passable defender in left field. But they know he lacks range and instincts because it is a new position for him. He will be their worst outfield defender. So Hoskins expects some mid-inning position changes when the data is clear.

So there appears to be some buy-in from Phillies players, at least for now, although I haven’t seen evidence of them trying it again so far this spring. The bigger question: Is it worth it?

Part of the complexity of making this move is that while most ground balls are pulled, making the infield shift a more obvious decision, balls to the outfield are sprayed more equally. Here are the 2017 breakdowns for fly balls and outfield line drives from ESPN Stats & Information:

Of course, the Phillies have their own team of analysts and it’s possible they’ve come up with a different number on the potential runs that could be saved, depending on how often the tactic is employed.