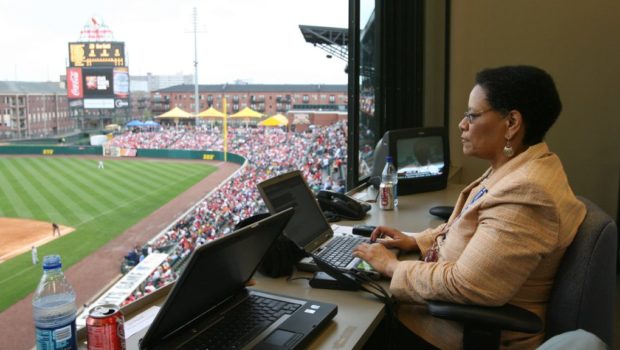 Smith, the first African-American female newspaper reporter to cover major league haseball on a daily basis, has won the J.G. Taylor Spink Award, the top honor for a baseball writer.

The Spink Award goes to a writer for “meritorious contributions to baseball writing” and is presented during Hall of Fame Weekend, July 28-31, 2017, in Cooperstown, N.Y. The announcement, based on balloting by the Baseball Writers’ Association of America, was made Tuesday during the winter meetings.

Smith, who received 272 votes from 449 ballots, including three blanks, represented the New York chapter of the BBWAA.

Smith is a coordinating editor for ESPN’s universal news group, with an emphasis on baseball. She previously worked as a reporter for the Hartford Courant, as a national baseball columnist at The New York Times and as a columnist for the Inky.

Smith, 62, is a trailblazer for women in sports media and fought for equal access. Notably, she was physically removed from the clubhouse by San Diego Padres players in the 1984 National League Championship Series with the Chicago Cubs. Former MLB commissioner Bowie Kuhn, who once fought to keep female sports writers out of major league clubhouses, later called her “the best baseball writer in America.”

Scott Powers, deputy sports editor of the Courant, said he uses Claire as an example to new writers of how to treat co-workers. “Such a kind person to editors working inside, and writers in the field,” he said. “Pure grace under fire.”

When an earthquake struck at the 1989 World Series in Oakland, California, Powers said Smith was there with another Courant writer, Jack O’Connell. When Smith was finally able to find a working phone, her first question to Powers was, “I can’t find Jack. Have you heard from Jack?” After he was able to reassure her that Jack was fine, and she made sure he contacted Jack’s family, “a magnificent, newsy story was filed by Claire,” Powers said.