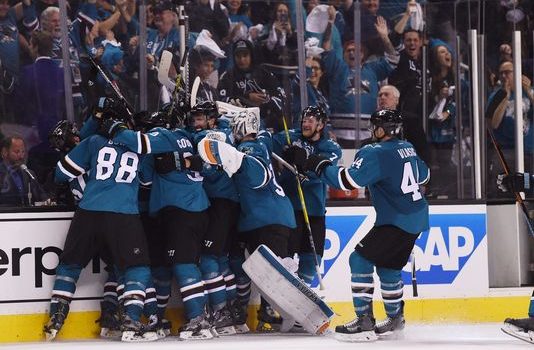 Rookie Joonas Donskoi scored 12:18 into overtime to give the Sharks a 3-2 victory in game 3 against the Pittsburgh Penguins before a frenzied full house at SAP Center last night.

“You couldn’t have scripted it any better,” Sharks center Logan Couture said. “Overtime win, loud. Fans were into it from the start.”

Donskoi scored after his linemates won some battles along the boards. Melker Karlsson was in aggressively on the forecheck, and despite losing his stick and a glove, he forced a bad clearing attempt that ended up at the feet of teammate Chris Tierney.

Donskoi picked the puck out of Tierney’s skates, circled the net and flared out wide before lifting a shot that beat Pittsburgh goalie Matt Murray short-side over his right shoulder.

“I asked [Joonas] if he knew where [the shot] went,” Tierney said. “I don’t think he knows still.”

Donskoi, who signed this summer as a free agent after playing in Finland for the past six years, now has the biggest goal in Sharks history, one that assured they would not face the chance of being swept from this best-of-7 series in Game 4 in San Jose on Monday (8 p.m. ET; NBC).

“Obviously a must-win game for us,” said San Jose goalie Martin Jones, who made 40 saves, including the final 22 shots he faced.

Donskoi’s goal prevented San Jose from becoming the first NHL team to lose five overtime games in one Stanley Cup Playoff (1-4). Pittsburgh is 4-3, including a 2-1 win in Game 2.

“We were saying that between the third period and overtime, ‘We’ve been on the other side of this, so let’s feel good about ourselves,'” San Jose forward Joe Thornton said.