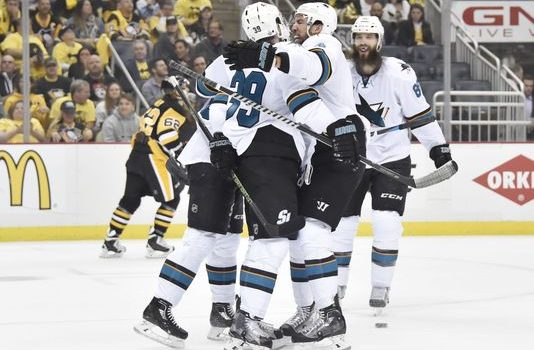 The San Jose Sharks live to skate another day.

Logan Couture played a part in the Sharks’ first three goals, and goalie Martin Jones made 44 saves in a 4-2 victory over the Pittsburgh Penguins last night in Game 5 of the Stanley Cup finals.

San Jose’s victory cut Pittsburgh’s lead in the best-of-seven series to 3-2 and denied the Steel City a chance to see a home team in a major sport win a title here since the 1960 Pirates.

Melker Karlsson scored what turned out to be the game-winning goal with five minutes left in the first period. Couture and Brenden Dillon assisted on Kalssson’s goal as Penguins rookie goalie Matt Murray allowed three goals on the Sharks’ first five shots on net. Joe Pavelski netted his first goal of the series with Murray pulled.

The series shifts to San Jose for Game 6 on Sunday.

Jones was brilliant as he protected the one-goal lead as the Pens piled on shots.

While the Sharks won Game 3 in overtime, they had not officially held a lead in the series. That changed 1 minute, 4 seconds into regulation as Sharks defenseman Brent Burns, who hadn’t scored in the final, spun around the net and shot the puck past Penguins goalie Matt Murray.

“I think Burnsy brings the same energy every night,” Sharks coach Peter DeBoer said. “It’s not realistic he’s going to score every night. I think he consistently tries to be a difference-maker in every game he plays. That’s the beauty of him. Tonight that was a huge goal for us.”

Couture, another San Jose player who had yet to score in the series, deflected the puck in to make it a 2-0.

“We needed some big-game performances from guys,: DeBoer said. “Jonesy was one of those guys in a tough environment. I thought we got big games from some other people, too.”

But even more quickly than the Sharks built their two-goal lead, the Penguins tied it.

Evgeni Malkin halved the lead with Sharks forward Dainius Zubrus in the penalty box 4:44 into the first period. Carl Hagelin scored the equalizer 22 seconds later as he roofed the shot past Jones,

“Obviously it’s tough,” Couture said . “You get a two-goal lead (and) it’s gone in a matter of a minute or a minute and a half. “Melker gave us the lead again. Jonesy did the rest.”