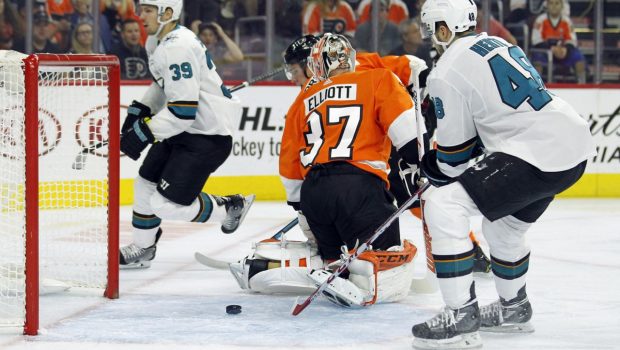 Let’s hope the Flyers home opener at the Wells last night was not a sign of things to come.

The Sharks were just warming up. They had five goals in their first three games – including a 4-0 loss a night earlier to the New York Islanders – and then scored five goals through two periods.

With the Flyers playing tonight at Ottawa, Elliott stayed in despite the miserable performance in front of him.

He faced 31 shots over the first two periods.

Flyers captain Claude Giroux and Sean Couturier missed open looks in the first that might have made it a game. Instead, they heard 20,000 fans voraciously boo them off the ice to end the period.

Coach Dave Hakstol said he should have benched Elliott, who faced 48 shots, after the second period.

”We left him out to dry. He’s our best player tonight,” Flyers defenseman Shayne Gostisbehere said. ”It could have been 8-0 after the first. It’s a little ridiculous. Some of us really got to look in the mirror on this team. We’ve got to respond tomorrow. When you leave a guy out to dry like that, it’s really not fair.”

San Jose got some help late in the first when replay officials in New York awarded Pavelski his second goal for a 3-0 lead. The puck was in play when Elliott cleared Pavelski’s shot until a whistle stopped the action. Sure enough, the review showed Elliott’s glove was behind the line when he swatted Pavelski’s puck and the no-goal was overturned.

”Any time the game kind of gets out of hand like that, it’s easy to relax. That’s when bad things can happen,” Kane said.

Not against the Flyers.

Kane redirected a puck off his skate late in the first to make it 4-0. It was San Jose’s first power-play goal of the season after a 0-for-12 start.

Gostisbehere and Wayne Simmonds scored for the Flyers.