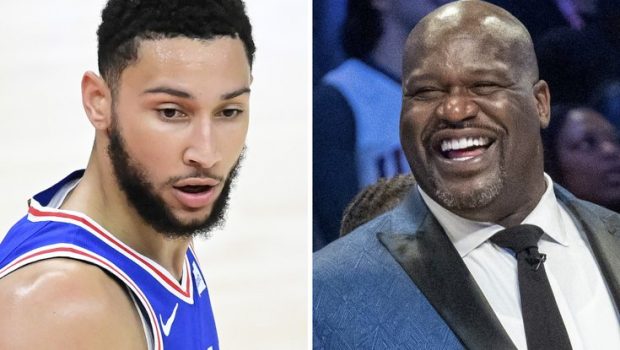 SHAQ DESTROYS CRYBABY SIMMONS, ‘ I WOULD GET RID OF HIM!

The guys in TNT’s “Inside the NBA” were announcing the All Stars last night.

And Sixer center Joel Embiid is a starter on the East team.

All of a sudden, Shaquille O’Neal, who rarely says anything, so when he does it’s important, went off on Ben Simmons without ever uttering his name:

“[Embiid’s] doing what he’s supposed to do. He’s dominating. We/I stay on big guys because I care about them. I want them to play a certain way. I want them to play at a certain level. The difference between [Embiid] and his soft partner is he can take criticism without being a crybaby, and he still wants to play. Because me and Charles, we’ve been on him. We told him to his face what he needed to do. He didn’t cry. He didn’t say I want to be traded. He didn’t complain about mistreatment, and that’s the difference. That’s why I like and respect him.

“The other guy [Simmons], I don’t respect. I mean, think about it, you’re missing a whole season because they asked your coach a question, “Can they win without you?” And your coach gave a funny answer. That should tell you that you need to get in the summer time and work on your game. You don’t think I haven’t been criticized by you guys and Stephen A. [Smith]? You don’t think I’ve been criticized by the New York and L.A. media? Great players get criticized, but great players also step up to the criticism and perform. So this other guy? I don’t respect him. I would get rid of him.”