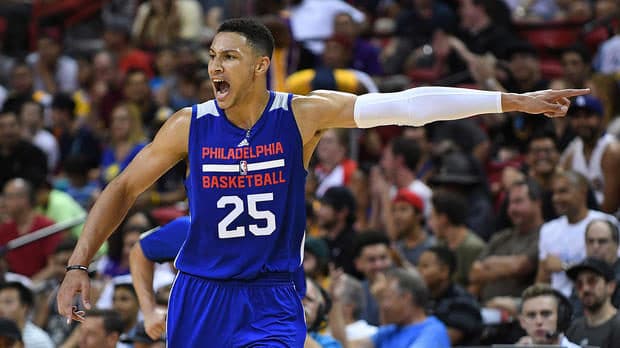 While speaking with the media last week at the Hall of Fame induction ceremonies, Shaquille O’Neal was asked by CSN Philly about the 2016 rookie class and if any players stood out as future stars.

“I don’t know all of them, but I know my guy’s going to be pretty good, Ben Simmons,” O’Neal said, referring to the Sixers’ rookie who was picked No. 1 overall.

“He’s a LeBron-type player,” O’Neal said Simmons, a 20-year-old forward. “What I mean by that, LeBron does a nice job of making everybody else around him better — passing the ball, doing the small things — and Ben is that type of player.”

Despite impressive averages of 19.2 points, 11.8 rebounds and 4.8 assists per game — numbers not too far off of O’Neal’s collegiate production of 21.6 points, 13.5 rebounds and 1.7 assists over three seasons at LSU — Simmons was criticized because LSU failed to meet preseason expectations and missed the NCAA tournament.

“He took a lot of flack (sic), especially at LSU with not really taking over games,” O’Neal said. “But he’s young. He’ll get to that.

“When it comes to other aspects of the game, he’s very, very intelligent. He plays the game very well.”