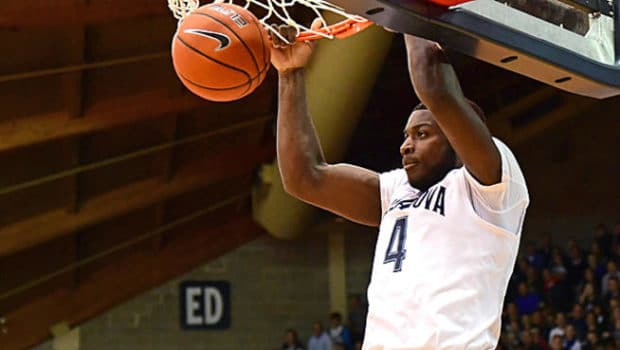 Eric Paschall (above) scored 15 points and Jalen Brunson had 14 to lead No. 6 Villanova to a 75-60 victory over Columbia at the Wells, the Cats’ 15th straight season opener.

”It’s going to be a little ugly early here,” Villanova coach Jay Wright said. ”But I do think in the end, we have a chance to be a good team.”

Mike Smith scored 19 points for Columbia, which hung around in the first half as they chased their second win over Villanova in five years.

Brunson, who made the Associated Press preseason All-America team, kept the Big East favorites from ever losing control.

”It starts with me,” Brunson said.

The game marked the anticipated debut of 6-8 forward Omari Spellman and the return of guard Phil Booth.

Booth was the leading scorer in the 2016 national championship game but missed almost all last season with an injured knee. Booth’s left knee held up against the Lions and he scored eight points.

Spellman was expected to become Villanova’s big man in the frontcourt last season. The NCAA declared the freshman academically ineligible for the season because Spellman did not complete his initial eligibility requirements in time. Spellman had 11 points and 11 rebounds.

The Wildcats were 25 1/2-point favorites to thump the Lions in the first of 12 games they will play this season at the Wells Fargo Center. Villanova’s on-campus home, the Pavilion, is in the midst of a $60 million makeover that will turn the woefully outdated gym into a state-of-the-art complex.

”It’s going to be a unique year,” Wright said.

”Whey they were doing the (lineup) announcements, I looked around and was like, damn there’s a lot of people here,” Columbia coach Jim Engles said.

Columbia actually beat the Wildcats at the Pavilion in 2012, the Lions’ first win over a Big East team in nearly 30 years.

The Lions kept this one close for a bit, too. But Columbia only trailed by nine at the break in large part because Villanova kept missing 3s. The Wildcats missed 12 of 18 in the half. Booth opened the second half with a 3 and the rout was on.