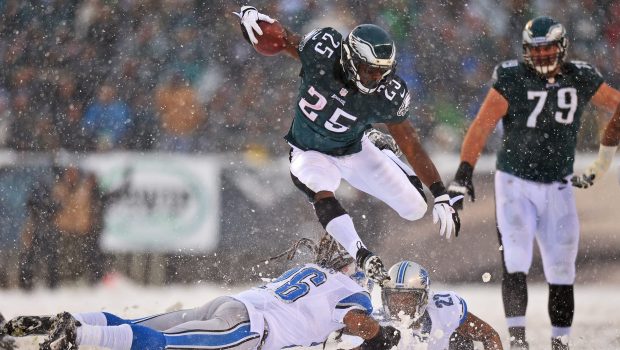 SHADY MCCOY’S RETIRING REGRET: ‘NOT BEING AN EAGLE IN MY PRIME’!

So, LeSean McCoy retired yesterday as an Eagle, 12 years after the Birds drafted him out of Pitt and six years after dumb-ass Chip Kelly traded him to Buff for Kiki Alonzo.

And Shady opened up, as he always has:

“My only regret I have is not being an Eagle in my prime,” McCoy said. “At the time when I got traded, I felt like I was the second guy, other than maybe [Eagles tackle] Jason Peters.”

McCoy did have three Pro Bowl seasons with the Bills.

“In the short time I was here, you kind of feel like that,” said McCoy. “But I think that if I was here for three more years, around that 10th year, that’s something I would have had with this franchise. … I was still hot when we parted.”

“I want to be remembered as the best running back to ever, ever play as a Philadelphia Eagle,” McCoy said.

McCoy is the Eagles all-time leader rusher (6,792 yards), so let the arguments begin.

One thought on “SHADY MCCOY’S RETIRING REGRET: ‘NOT BEING AN EAGLE IN MY PRIME’!”