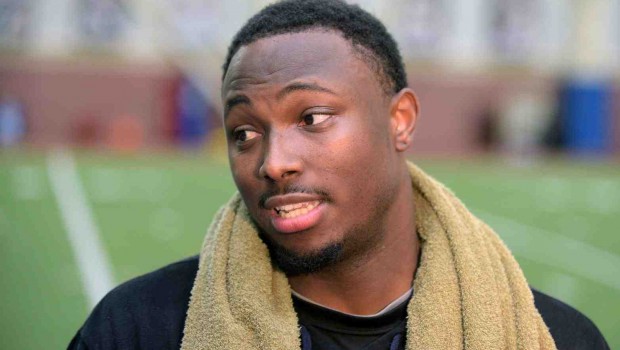 Outside The Lines’ John Barr reported yesterday that McCoy has hired prominent Philly defense attorney Jack McMahon to represent him.

When asked by OTL if an arrest of McCoy was imminent, McMahon said, “As far as a time frame, I have no idea. Anybody who tells you they do is guessing. If in fact he were to be charged, [McCoy] would obviously turn himself in.”

Philly police have completed their investigation into an alleged nightclub assault of two of the city’s off-duty police officers involving Buffalo Bills running back LeSean McCoy.

A spokesperson for the district attorney’s office said Tuesday that they have received the case from police and are reviewing it for potential charges.

McMahon said he’s spoken with Michael Barry, assistant district attorney, who is handling the case and will ultimately decide if McCoy and others involved in the alleged altercation are to be criminally charged.

When asked about his discussions with Barry, McMahon said: “I talked to him [Barry] and he is reviewing all of the video, the police interviews and the witness interviews.”

“I think at this juncture, I don’t want to make any comment on the case,” McMahon told OTL. “It’s a little premature. I was a prosecutor once myself. I understand their job and I don’t think the media or lawyers should be spinning any decisions they make.”

McMahon did not say where McCoy is now, although the running back has maintained a home in nearby Marlton, New Jersey.

A statement released Monday by Philly police said that two off-duty officers, both 40-year-old black men and members of the city’s police department, were injured in a fight with four black men, aged 26 through 30, around 2:45 a.m. Sunday. CSNPhilly.com reported that a third off-duty officer was also involved in the fight.

Police did not identify the four suspects, but a man familiar with the investigation confirmed to ESPN’s Mark Schwarz and The Associated Press that McCoy, who played six seasons for the Eagles, is one of the men under investigation. The man spoke on condition of anonymity because he is not authorized to publicly discuss the case.

The argument, which, according to multiple reports, took place inside the Recess nightclub in the Old City, began over ownership of a bottle of champagne, according to the police statement. Police said “pushing and shoving” over the bottle led to one of the off-duty officers being knocked to the ground, and while he was on the ground, he was “punched, kicked and stomped about his body and head multiple times by all four suspects.”

Another off-duty officer joined with club security to help break up the fight, and “all parties were ejected from the club,” police said. The officer knocked to the ground was Roland Butler, according to CSNPhilly.com. He went to a hospital, where he was treated for a cut to his right eye, a broken nose, broken ribs and a sprained thumb. The officer who broke up the fight was also admitted to a hospital, where he received eight stitches over his left eye and was receiving treatment Monday for a possible skull fracture, police said in their statement. A police source tells Schwarz that one of the officers also suffered an orbital fracture.

John McNesby, president of the Fraternal Order of Police Lodge 5, a police union, told Philly.com that the officers “look like they got the brunt of it.”

McNesby spoke to Barr on Monday to detail the extent of physical damage to the officers: “This was an all-out beatdown with broken bones and serious injuries. These officers are hurting. They’re in pain. These are serious injuries.”

McNesby did not get into details about who instigated the physical confrontation, though he defended the officers.

“From what I’m hearing, they were defending themselves,” he told Barr. “They were not the instigators.”