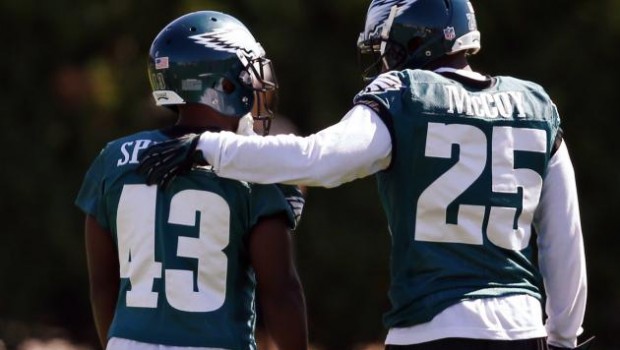 IS SHADY MC COY'S BRILLIANCE A FANTASY OR THE REAL THING?

The mystery of LeSean McCoy’s missing running game has been vexing Eagles Nation, not to mention untol numbers of fantasy owners.

Coming off a 2013 season in which he ran for a league-high 1,607 yards, McCoy’s struggles in 2014 through five games are making history.

That season average is a fraction of his 5.1-yard average last year. Only one defending rushing champion since 1970 has fared worse through five games, according to Stats, LLC: Curtis Martin of the New York Jets averaged 2.7 yards per carry in the first five games of 2005 after winning the 2004 rushing title. But Martin’s decline wasn’t nearly as shocking given his age at the time: 32. Martin finished with 735 yards, in what turned out to be his final NFL season.

McCoy, however, is just 26. And he runs in an offense designed by Eagles coach Chip Kelly, who specializes in creating wide running lanes for his running backs. The Eagles’ other main back Darren Sproles has gained 172 yards on 25 carries (6.9 per tote). 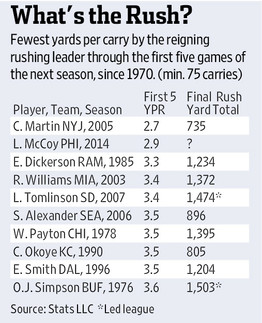 While it’s looking like a down year for McCoy, there is still hope for a major turnaround. In 2007, LaDainian Tomlinson was struggling for the San Diego Chargers at just 3.4 per carry through five weeks. He finished with 1,474 yards and a 4.7-yard average on his way to winning a second-consecutive rushing title.

The same thing happened with Buffalo’s O.J. Simpson (just 3.6 per carry through five games) in 1976. Simpson rebounded to finish the season with 1,503 yards on 5.2 yards per attempt.