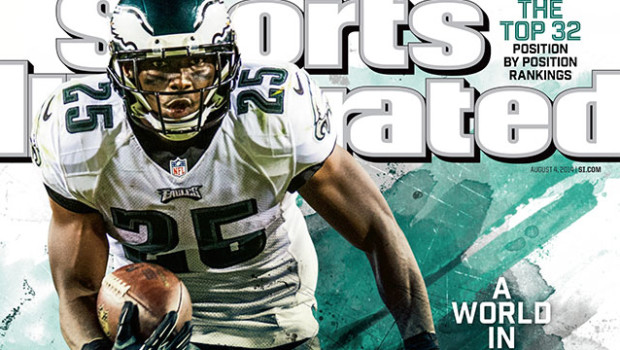 Lots of analysts thought that when Darren Sproles was signed by the Eagles that would cut down on the number of touches LeSean McCoy would get, especially in passing situations. McCoy had  52 grabs last year (not a career-high). Sproles has averaged 77.3 catches per year over the last three seasons.

But Eagles coach Chip Kelly told SiriusXM NFL Radio that there isn’t a set number on McCoy for touches this season, suggesting that so long as McCoy can handle the workload, he’ll use him.

McCoy had a career-high 366 total touches in his first year with the Eagles. Should we expect McCoy to get near those numbers again in 2014?

To get a better idea on an answer, check out how Kelly typically managed his backs at Oregon. He always had at least two contributors: one stud workhorse in the run game and another who would dominate receptions.

In 2012 Kenjon Barner led the way on the ground with 21.4 carries per game but averaged just 1.5 receptions per. De’Anthony Thomas, on the other hand, picked up 7.1 carries and 3.5 catches per game.

There’s no comparison to these numbers and what happened in Philly last year: McCoy had 19.6 carries per game and 3.3 catches per game while Brown finagled 4.7 carries and 0.5 catches per contest. Chris Polk had less than one carry and one catch per matchup.

So the thought is that Kelly could aim to go back to his roots — but not all the way back. He’d be silly to not use McCoy as a receiver, though he’d be just as cuckoo to nottake advantage of Sproles’ skill-set. He also has to account for the loss of DeSean Jackson, and even though Jeremy Maclin, Jordan Matthews and Zach Ertz will be asked to replace D-Jax’s numbers, Sproles will help too. Eagles backs totaled 64 receptions last year. That number’s going up.

Even with Kelly’s comments this week, I’m anticipating a drop in receptions for McCoy, though not one on par with what Barner or James had at Oregon. I’m also expecting Sproles to fill Thomas’ role almost down to the letter — a guy who gets 3 to 4 catches per game and does a little bit on handoffs. Probably not enough to drag down McCoy’s 19.6 carry average from last season, though. That’s a good thing for those who take McCoy in Round 1.