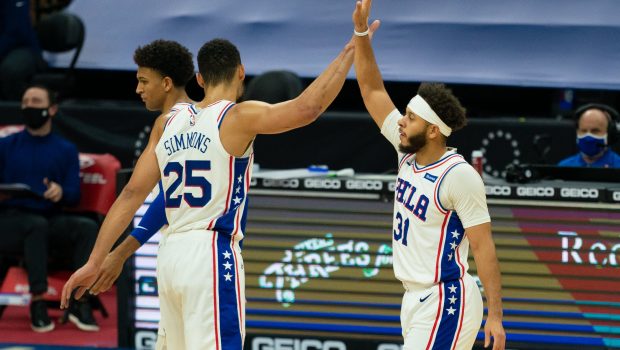 SETH CURRY’S FOUND A HOME IN PHILLY, WITH SIMMONS OR NOT!

Sixers 3-ball bomber Seth Curry has played with Ben Simmons (last season) and without him (this year).

And he hasn’t missed a beat.

In an interview with Michael Scotto at HoopsHype, Curry gave his thoughts on the Simmons situation:

“Honestly, it’s been pretty normal. He hasn’t really been around the team at all, so it’s not like it’s been a distraction or anything. It’s kind of like he’s been out and not here. We know who we have on our team to start the season. Obviously, if he comes back, we’re going to integrate him. He’s been part of the team for a long time, so it shouldn’t be that hard.

“It’s unfortunate. I just view it as like a guy who got a long injury. I focus on who we have on the team, who comes to practice every day, who’s at shootaround, and how we’re preparing for the games. It’s unfortunate he’s not with us because he’s obviously a big part of the team and a great player who can help us win even more, but everybody has their own situation in this league. It’s a business. I know he’s going through some stuff, just like teams go through stuff throughout the season. He deals with the consequences of the stuff he does with the fines or whatever it is. It goes both ways.

Curry has one season left on his the four-year, $32 million extension, and he’d like to stay in Philly:

“I hope so, but I thought I’d be in Dallas for a long time, too, so you never know. It’s a crazy business. Things change fast. As a player, you want to be somewhere for a long time. It’s been a great fit. I love the energy in Philly. We’ll see what happens.”