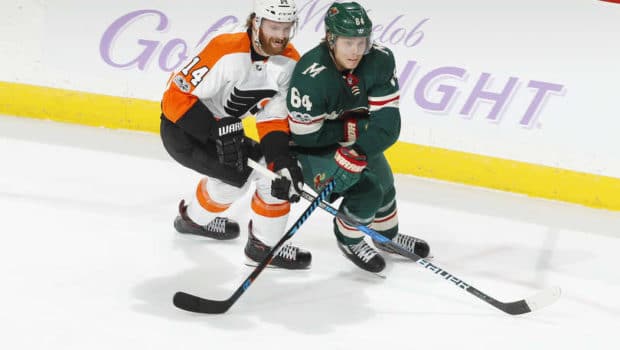 BUT, SERIOUSLY! WILL THE HAPLESS FLYERS EVER SCORE AGAIN?

The Flyers were shut out last night by the Wild 3-0 for the second straight game and fifth of the season.

“Gotta score in this league to win hockey games,” Scott Laughton said. “You can’t get shut out two games in a row. You gotta score. Bottom line.”

“Sometimes when it rains, it pours when you can’t score,” goalie Brian Elliott added. “It’s pouring on us a little bit right now.”

It’s the first time in franchise history that the Flyers have been held scoreless five times in their first 18 games.

“(Michael Raffl) makes a great play,” Laughton explained. “It hit off (Dubnyk’s) shoulder, then get another chance and I tried to elevate it, but it’s rolling and hits his pad. I mean, it feels like our line has three of those a game and nothing to show for it. I don’t know. It’s frustrating.”

The Flyers haven’t scored in 156 minutes, 9 seconds. They have never been shut out in three straight games in club history.