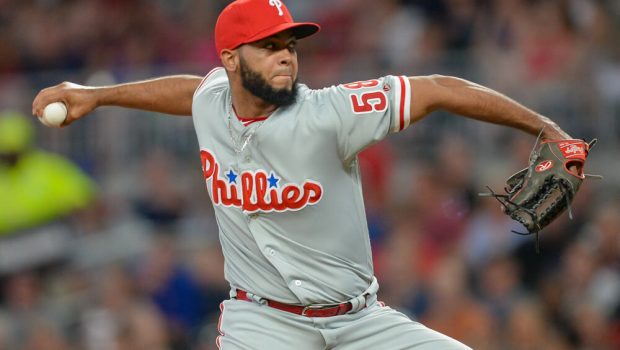 SERANTHONY MELTS DOWN, AND SO DOES PHILS 2ND WILD CARD LEAD!

Ronald Acuña Jr. hit a go-ahead, two-run homer in a six-run eighth inning off Seranthony Domínguez and the Atlanta Braves rallied for a 7-2 victory over the Phillies, who lead for the second wild card playoff spot was reduced to 1 1/2 games.

William Contreras connected off Phillies starter Ranger Suárez to make it 1-all in the fourth and added an RBI single off Domínguez to make it 4-2. Contreras went 3 for 4.

Domínguez walked pinch-hitter Eddie Rosario to begin the eighth and Acuña attacked on the first pitch he saw, sending a 98 mph sinker 383 feet into the seats in right-center for his 12th homer. Austin Riley doubled, advanced on a walk and scored on Contreras’ hit up the middle. Michael Harris II added an RBI single and Ozzie Albies a two-run bloop double to make it 7-2.

Schwarber made it 1-0 to begin the fourth when he got the first hit off Max Fried at Truist Park since the fifth inning of an Aug. 30 loss to Colorado, a span of nine innings. The ball sailed 410 feet into the Braves’ bullpen and left his bat at 110 mph.

Suárez held the Braves to one run on two hits in six innings after going 0-2 with a 5.06 ERA in his three previous starts against Atlanta this year. The lefty walked three and struck out four, lowering his road ERA to 1.63 in nine starts since June 7.

The Phillies began the day 2 1/2 games up on San Diego for the second wild card. Defending World Series champion Atlanta had lost four of five but have a 66-28 record since June 1, best in the majors over that span.

After Contreras tied it at 1 with his 18th homer — a 439-foot shot that came off his bat at 112 mph and landed in the seats in left-center — Segura responded with his 10th homer to make it 2-1 in the fifth.

Jesse Chavez (4-1) earned the win after getting the final out of the eighth. Domínguez (6-5) allowed three hits and five runs in two-thirds of an inning.

“Any time you lose a game like that, it’s tough,” Phillies interim manager Rob Thomson said. “But these guys know what’s ahead of them and they’re going to bounce back just like they have all year.”

Fried threw a season-high 110 pitches, allowing two runs and four hits with three walks and four strikeouts in six innings. The All-Star lefty’s most recent start at Truist Park, a 7-1 win over Miami on Sept. 4, ended with five innings of hitless ball in a rain-shortened outing.

“I felt like I could’ve been a little bit better,” Fried said. “Keeping us in the game was definitely where I was at. That eighth inning was huge. Put together great at-bats and really put us over the edge.”

The teams began the night having split 12 games against each other this season, but the Braves have won nine of their last 12 against Philadelphia at Truist Park, outscoring the Phillies 63-40.