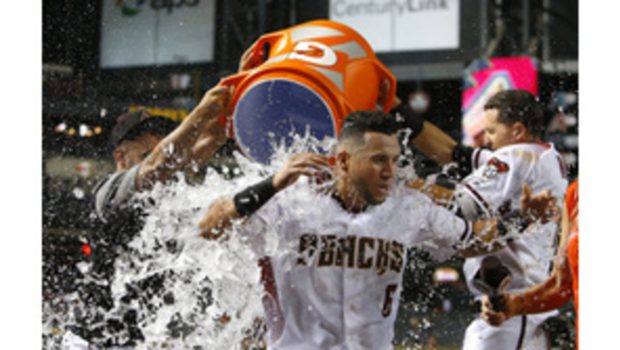 SERANTHONY CHOKES AWAY ARRIETA’S GEM AS PHILS LOSE 3-2 IN 14!

The Phillies’ bubble burst last night in Phoenix, thanks in large part to their bubble-like bullpen.

David Peralta hit his second solo homer off the game in the 14th inning and the Arizona Diamondbacks rallied from a two-run deficit in the ninth to beat the Phillies 3-2.

His chance at a fifth straight win came undone in the ninth.

Yoshihisa Hirano (3-2) didn’t allow a hit the final two innings, with Jorge Alfaro just missing a homer to right for the final out of the 14th.

The Diamondbacks kept putting runners in scoring position, but failed getting that crucial hit until Peralta hit the first pitch he saw from Austin Davis (1-2) off the wall and out in left-center. Peralta was mobbed at the plate after ending the Phillies’ five-game winning streak with one swing.

The right-hander is second in the NL at inducing groundball double plays with 19 and got another in the second inning to strand Escobar after a leadoff double.

Arrieta was lifted after 110 pitches and seemingly in great position, only to watch it go up in smoke with the ninth-inning blowup.

“He pitched great, and we definitely strive to win baseball game like that for a starting pitcher who performs like Jake did,” Phillies manager Gabe Kapler said.

Godley allowed two runs on five hits and struck out seven in 7 1/3 innings.