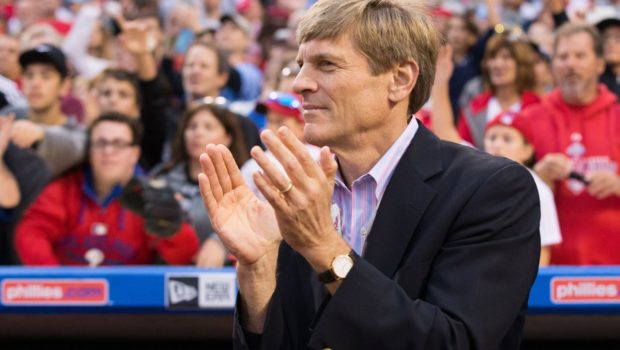 But it seems as if the Phillies have adopted a Three Stooges attitude about pursuing prize free agent Bryce Harper.

By Wednesday, they were feeling perhaps the most optimistic they have in weeks about their chances of landing Harper, the 26-year-old slugging outfielder last seen playing right field for the Washington Nationals for the past seven seasons.

But there is considerable distance between optimism and a done deal.

All winter, the Phillies have served as the fulcrum of this free agent market, never more so than on two dates:

In the wake of that news, Phillies general manager Matt Klentak explained that the Padres’ winning offer to Machado had exceeded the Phillies’ own “valuation” of the player.

“Sometimes,” he told reporters, “you have to be willing to walk away.” Asked if the $300 million figure exceeded the Phillies’ valuation of any free agent — which is to say, Harper — Klentak said: “I won’t comment on that. I will say this: Every player is different. They bring different strengths, weaknesses, risks, rewards, etc.”

Not all that long ago, owners being “a little stupid” about spending is what drove free agency. A smart, patient agent with a knack for hyperbole and psychology, such as Boras, could always find a desperate owner to hand over $252 million for Alex Rodriguez, as Tom Hicks of the Texas Rangers did in December 2000, or another to give Prince Fielder a $214 million deal, as Detroit’s Mike Ilitch did in January 2012.

There were 30 owners. It only took one willing to be a little stupid for Boras to make a deal. It usually wasn’t very hard.

Today, Middleton’s November comments notwithstanding, free agency is driven largely by GMs armed with Ivy League degrees, proprietary analytics software and full (or near-full) autonomy from ownership to decide whom to target and how much to offer them. The result of the triumph of rationality over emotion has been a two-year downturn in free agency — as teams have come to value players in largely the same way — and the near-extinction of older, veteran players. It has also created a severe strain on labor relations.

“You finally get offers, and six or seven teams are giving you the same offers. They told us they have an algorithm, and here’s where you fall on the scale,” veteran reliever Brad Brach told the Chicago Sun-Times after signing a one-year deal with the Cubs. “… It’s just kind of weird that all the offers are the same, and they come around the same time, and everybody tells you there’s an algorithm, but you figure teams would have different ones.”

Even Boras, with the most high-end clients and the most aggressive tactics, has struggled to adjust to the changing times. Last spring, after Yu Darvish set the market for starting pitchers with a six-year, $126 million deal with the Cubs in mid-February, Boras aimed to beat that with the more accomplished Jake Arrieta, only to wait another month and still have to settle for a three-year, $75 million deal with the Phillies on March 11.

That brings us to the present. For Harper and Boras, the aim is clear: to top not only Machado’s deal — for the time being the largest free agent contract in major sports history — but also Giancarlo Stanton’s overall-record $325 million deal (signed as an extension with the Miami Marlins in 2014) and Zack Greinke’s record-setting $34.4 million average annual salary. A 10-year, $350 million deal would top all three.

But the rest of Harper’s market is nebulous. The Chicago White Sox, apparent runners-up for Machado, are reportedly not bidding for Harper. The San Francisco Giants appear inclined only to make shorter-term offers, which apparently do not interest Harper. The Nationals say they have moved on since Harper rejected their 10-year, $300 million offer in November. All of it, of course, is subject to change.

For Klentak and the Phillies, the objective is also clear: to land a megastar outfielder, thus fulfilling their owner’s ambition (and, by extension, their fans’ expectations), without being stupid about it. That means, for one thing, not bidding against themselves.

[Bryce Harper is the biggest story at Phillies camp, even though he’s not a Phillie or in camp]

On Monday, a full day before Machado agreed to the San Diego deal, a reporter for the Phillies website ran a Twitter poll asking which player, Machado or Harper, fans preferred. A silly, meaningless little exercise, right? Except that nearly 10,000 users responded, and the overwhelming favorite, by a margin of 86 percent to 14, was Harper. The poll results did not escape the notice of the Phillies front office.

But the Phillies’ internal calculus remains as unknown as Harper’s. Do they truly value Harper over Machado? After losing Machado, do they have to sign Harper now to make their offseason a success? Is Middleton himself calling the shots on a deal that could wind up costing him a third of a billion dollars — and shouldn’t he be? Wouldn’t his own valuations for Harper, which, by definition, must include the player’s star power and marketability, be different from the cold figures of the front office’s algorithm?

In the spring of 2019, it is hard to square “stupid” with “willing to walk away.” But within that vast and treacherous range, perhaps there is still room for the Phillies to be both.