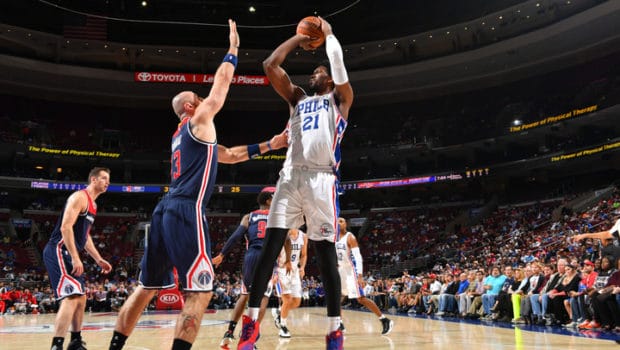 SEE WHERE SIXERS RANK IN ESPN’S ‘MOST WATCHABLE’ TEAM LIST!

Believe it or not, these guys ranked a few spots higher before the sad news about Ben Simmons. I mean, I’m sorry, but watching Simmons and Joel Embiid (above) develop during another mega-losing season would have been more fun — and more appealing to dabbling fans– than a garden-variety game between 42-win Eastern Conference teams.

As it is, we finally get to see Embiid play against something other than air, chairs, and 5-foot-10 coaches. I can’t freaking wait. Once the Sixers deal either Nerlens Noel or Jahlil Okafor, the other will get to go solo as Embiid’s backup — and probably share some minutes with him.

And they’ll have real, actual NBA guards to feed them the ball! Sergio Rodriguez is a whip smart passer, and Gerald Henderson is one of the sneakiest leapers in the league when he can load up off two feet; he’ll unleash a half-dozen earthquake dunks that come out of nowhere. Fans are going to love Dario Saric’s blend of European refinement and sharp-elbowed grime, and if Simmons does come back this season, Brett Brown will see what the two “power forwards” can do together. I’m optimistic they can work well alongside Embiid.

Simmons’ absence might open time for Jerami Grant, who hunts dunks and blocks with a full-speed violence that is scary. He is a collision waiting to happen. Sauce Castillo is still here!

Brown’s enthusiasm seeps through the TV, and everything about the broadcast is aces — the floor, the unis and the expert work of Marc Zumoff on the play-by-play: