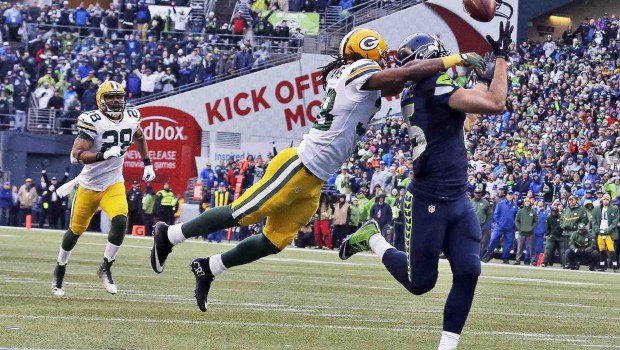 Consider this about the Seattle Seahawks’ miraculous comeback on Sunday to beat the Green Bay Packers for the NFC title and a trip to defend their Super Bowl title:

It was an impossible dream.

Not even the Man of La Mancha would argue.

The box score will show how hopeless it looked when Seattle received the ball with less than four minutes remaining down by two scores.

The numbers reveal how the Seahawks had committed five turnovers, been held to less than 250 total yards and hadn’t scored a touchdown on offense all game.

But the greatest measure of how unfathomable it was that Seattle came back to beat the Green Bay 28-22 in overtime may be this:

“I was just sort of speechless,” said Seattle cornerback Byron Maxwell. “The confetti was coming down, people were running on the field and I was still trying to take it in. It was unreal.”

“It still hasn’t hit me,” linebacker K.J. Wright said later. “I mean, 30 years from now people will look back at this game and they’ll be like: ‘Wow.’”

It was that sort of game that unfolded, a classic comeback that ranks among the NFL’s greatest postseason games and deserves to be immediately immortalized by NFL Films. Trailing 19-7 with just 2:09 left in the fourth quarter, Seattle staged an absurd late rally, scoring twice before the end of regulation and setting up Russell Wilson’s dramatic, game-winning 30-yard touchdown pass to Jevon Kearse to win the game in overtime (photos at top and left).

The win secured Seattle’s place in the Super Bowl in Glendale, Ariz., on Feb. 1. The Seahawks remain on course to become the first team to repeat as NFL champions since the New England Patriots in 2004.

“It makes you just sit back there and like, whoa,” said Seahawks safety Earl Thomas. “Down with three minutes left and look what happened. I’m clueless right now.”

It was a wild game filled with errors, dropped catches, clutch third-down conversions and more turnovers than anyone would have reasonably expected. Green Bay controlled the game almost from the start and held a 16-0 lead at halftime.

The Packers could practically taste victory when Wilson tossed his fourth interception with a little more than five minutes left in the fourth quarter.

At that stage, the Seahawks were still down by 12 points and some of the record crowd of 68,358 toned down their noise and began heading for the exits.

It was hard to blame them. The only touchdown Seattle had scored came at that stage had come on a fake field goal in the third quarter, when punter Jon Ryan hit a backup offensive tackle named Garry Gilliam for a 19-yard score. Seattle’s defense of its Super Bowl title was all but done.

But then Seattle’s out-of-sorts offense finally mounted a drive, allowing Wilson to dive in for a 1-yard touchdown to cut the lead to 19-14. When Packers tight end Brandon Bostick muffed the ensuing onside kick, the comeback was on. Four plays and 55 yards later, Marshawn Lynch strolled into the end zone to put Seattle in front.

Even then, Green Bay would have had a chance to win the game on its final drive, but for a freak two-point conversion. It looked like Wilson would be sacked when he rolled to his right and was confronted by two defenders. But Wilson unfurled a rainbow pass to tight end Luke Willson on the opposite side of the field.

Green Bay’s Mason Crosby kicked his fourth field goal of the game to send it to overtime. But by then, the noise inside the stadium was deafening and the momentum was with Seattle. “Between the onside kick, the two-point conversion, the fake field goal, it was like destiny today,” said Willson. “That’s what it felt like.”

The noon kickoff made for an unusually early start and the Seahawks started out like a team that had knocked back a few too many mimosas at Sunday brunch. Wilson tossed an interception on the Seahawks’ opening drive, then receiver Doug Baldwin fumbled on a kickoff return not long afterward. Even relentlessly sunny head coach Pete Carroll looked oddly somber on the sideline.

Green Bay wasn’t able to convert either of its early turnovers into a touchdown, settling for a 6-0 lead on two Crosby field goals, but it didn’t seem to matter.

Seattle’s defense could hold out only so long and when another Seahawks offensive drive ended in a quick three-and-out, Green Bay took over in positive field position for a third series running. Aaron Rodgers briskly led the Packers downfield, finding Randall Cobb in the back of the end zone for a 13-yard touchdown.

Wilson was intercepted again shortly afterward and Green Bay took a 16-0 lead into halftime. At that stage, Wilson had completed more passes to Green Bay defenders than to his own receivers.

Seattle’s offense continued to struggle after halftime as Green Bay’s man-to-man defense blanketed the Seahawks receivers all over the field. When Morgan Burnett picked off Wilson for the final time, it was his fourth interception of the game—and the fourth on a pass intended for Kearse.

In overtime, Wilson and Kearse would find redemption. The Seahawks won the toss and had advanced to the Green Bay 35 thanks to a key third-down pass from Wilson to Baldwin. On the next play, Wilson hit Kearse with a 35-yard pass in the back of the end zone and the Seahawks were headed back to the Super Bowl.

“I just wanted to give Jevon a chance to win the game,” Wilson said. “I’ve seen him make so many plays before. He always does that for us. I even I told [offensive coordinator Darrell] Bevell on the sideline when we won the coin toss I’m going to hit Jevon Kearse for a touchdown.”

By the end, as strands of blue-and-gold covered the turf and the field slowly began to empty, one Seahawks player remained out in the middle.

Defensive end Michael Bennett, still dressed in full uniform, was riding a bicycle from one sideline to the other across the middle of the field.

It was just another surreal moment on an afternoon full of them. 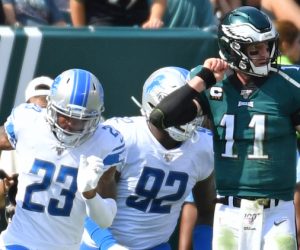