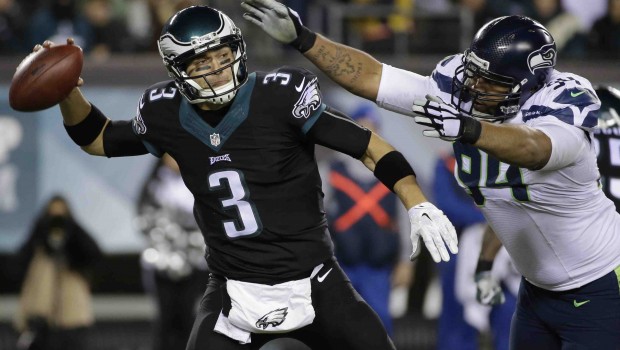 HOW SEATTLE’S DEFENSE MADE EAGLES’ OFFENSE A NON-FACTOR

Eagles QB Mark Sanchez never had a chance against the Seahawk rush.

Sunday’s Seahawks’ pasting of the Eagles had many fathers:

Coach Pete Carroll drew up a great game plan; QB Russell Wilson was mostly unstoppable in the air; and Seattle’s focus largely took the boisterous crowd at Lincoln Financial Field out of the game as an influence.

But look no further than Seattle’s shutdown defense for the No. 1 reason the Eagles are now 9-4, tied atop the NFC East with Dallas, which comes to town next Sunday night.

The Seahawks defense is back to championship form. After astoundingly holding the Cardinals and 49ers to six points total, Carroll’s crew completely snuffed out Chip Kelly’s high-powered offense.

The Eagles averaged 5.7 yards per play coming into the game and a league-leading 72.9 plays per game.

They did not do … that on Sunday.

A Kelly-run offense has never been held under 140 yards, college included. That’s a lot of football games where defenses couldn’t manage to shut down Kelly’s offense and Seattle did it on Sunday.

They were physical across the board and dominated the line of scrimmage, holding the Eagles to 2.6 yards per carry. LeSean McCoy averaged over 6 yards per carry the last two weeks; he averaged 2.9 Sunday. Darren Sproles was a non factor in the game.

Philly’s receivers never had a chance to do anything deep and were utterly blanketed down the field all night long. Jordan Matthews, Jeremy Maclin and Riley Cooper combined to finish with 8 catches and 57 yards. Suffocating.

This is what we saw from Seattle as they stormed to a Super Bowl victory last season. They’re heating up at the perfect time and opponents should be very afraid. Even scarier? Seattle took its defense on the road this week.