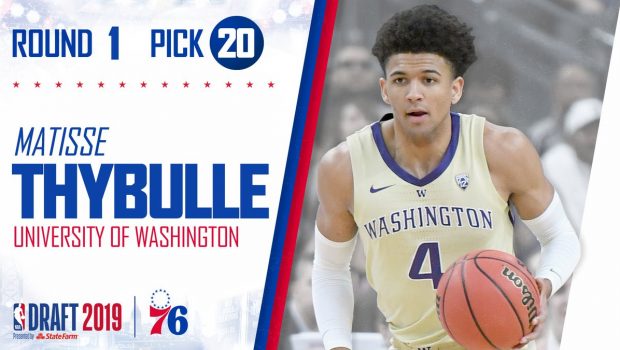 Strengths
– Prototype wing tools at 6-6 with a 7-0 wingspan, big reach and a projectable frame. Fluid athlete. Tools allow him to play above the rim in space.

– One of the most impactful defenders in the draft. Averaged 4.4 steals and 2.8 blocks per 40 minutes playing on the perimeter, though Washington’s zone defense was a factor. Elite instincts in the passing lanes. Quick hands. Tremendous at blocking jumpers from behind. Has the tools and instincts to check positions 1-3 at the NBA level.

– Solid feel for the game offensively and understands his role. Averaged 2.8 assists per 40 minutes for his career with a positive assist-to-turnover ratio. Will make the extra pass.

Improvement areas
– Shot over 36% from 3 in each of his first three college years on 350-plus total attempts, yet cashed in only 30.5% of his triples as a senior. Rigid mechanics. Shoots it somewhat flat and across his face. Turns down open spots. Mechanics break down when closely contested.

– Extremely limited overall offensively. Averaged just 12.5 points per 40 minutes over his four-year career. Not an advanced ball-handler. Limited to mostly transition runouts and spot ups. Lacks a degree of aggression overall. Feel around the rim as a finisher isn’t great. Will he ever be more than a fifth option on offense?

– Elite defender but doesn’t play with the most physicality. Can he check power wings or is he better off against 1s and 2s in the NBA? Doesn’t play well in a crowd or have a knack for drawing fouls. Averaged just 4.1 rebounds per 40 minutes over the course of his career.

The 76ers traded up to No. 20 to select Matisse Thybulle here.

Matisse Thybulle was rumored to have a promise from the 76ers at No. 24, and it appears the Celtics snuffed that out and forced their hand in making a trade, which is a very Danny Ainge move. The Sixers get arguably the best defender in this class in Thybulle, who broke every record in college basketball with his combination of blocks and steals while operating out of Washington’s zone.

The question will be whether Thybulle can score enough to stay on the court for Philadelphia, as the track record of NCAA seniors who averaged single-digit scoring in their final year of college and went in the first round is extremely poor. Philly stars Joel Embiid, Ben Simmons and Jimmy Butler (free agent) will love how few touches Thybulle needs to be happy; but Thybulle will need to show he can make perimeter jumpers if he is to prove that he needs to be guarded.