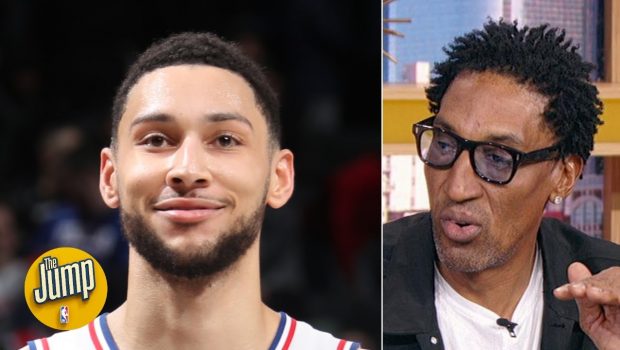 And, in a Q&A with GQ’s Tyler R. Tynes, Hall of Famer Pippen, who helped Michael Jordan and the Bulls win six NBA titles, manages to add coach Doc Rivers his list of losers.

The most recent heartbreak was the Sixers falling to the Hawks in seven games. The biggest critique was of Ben Simmons’ inability to play on the offensive side of the floor. Did you watch the series? What did you think?

Why y’all feel that way about Ben Simmons?

I was at Game 7 and I think a lot of fans felt like to score five points and to almost have no points in the fourth quarter of all seven games, plus his poor free throw shooting, is inexcusable.

Okay. Understood. You guys have been looking at Ben Simmons for five years now? And you can say this to Stephen A. Smith, too: Y’all know he can’t shoot. Y’all know he don’t look to shoot in the fourth quarter. You know he’s afraid to go to the foul line, he don’t wanna be humiliated, so what are you asking me? I’m not against Ben Simmons. But I think he is who he is.

I watched a lot of games that Doc [Rivers] shouldn’t have had him in, in the fourth quarter. If I give you a deck of cards and I give you a deuce of heart and a deuce of diamond, and we playing Spades, why you keep grabbing those cards when you know you’re gonna lose in that category? This kid been this way the whole time and Doc brought him in and set him up for failure. He been like this! And you guys know he been like this. And Doc kept putting him in the game, he kept letting that team do fouls on him. Take him out the game! The Lakers did it with Shaq, and he’s bigger and more dominant and probably more fearless than Ben Simmons. Doc made him be a failure.

He’s still a good basketball player. That’s his weakness: shooting the basketball. If you take that away from Ben Simmons, he got no weakness. That’s Giannis’ weakness, too. But, Giannis don’t mind being humiliated. That’s the difference between him and Ben Simmons. Giannis will go to the free throw line and shoot two fucking airballs and come right down the court the next time and try and dunk on you. If Ben Simmons miss a free throw, he gonna start passing it before he get to the free throw line on the other end. He didn’t even wanna cross half court with the basketball because he was so afraid of being humiliated going to that foul line. That’s why he didn’t try to make that dunk at the end of the game. He’s been doing it all year, bro.