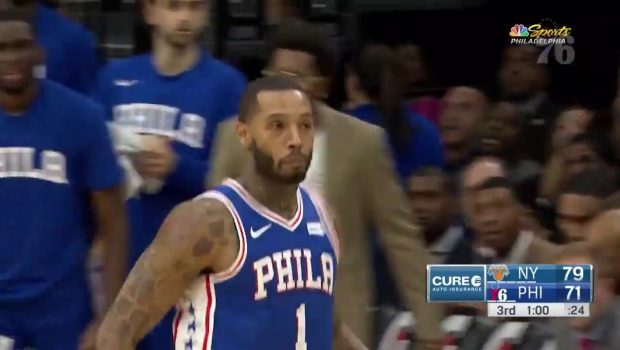 SCOTT WAS GREAT DOWN THE STRETCH IN SIXERS WIN!

Joel Embiid had 23 points and 13 rebounds, and Scott scored 12 points.

The only shot that mattered in Philly was the 3 from Simmons, finally, in his 172nd career game and after nearly $19 million in salary.

“It feels good, yeah. You put in work in the summer and it pays off,” Simmons said.

Simmons sank a 3 against the Guangzhou Loong-Lions of China in the preseason that had Sixers fans treating the shot like he hit a winner in an NBA postseason game.

Against the Knicks, Simmons took a bounce pass from Furkan Korkmaz and calmly drained the shot with 8:20 left in the first quarter.

“There’s Simmons. Yes! He did it,” Zumoff said. “Maybe now they’ll finally leave him alone after that! He hits the 3! The first of his NBA career!”

Embiid thundered a two-handed jam off a turnover to tie the game at 82-all and put some life back in the Sixers only for Marcus Morris to hit a jumper for an 85-83 lead.

“He be flapping. He was flapping and grabbing,” Morris said. “I’m not the one that’s gonna take that. He knows that.”