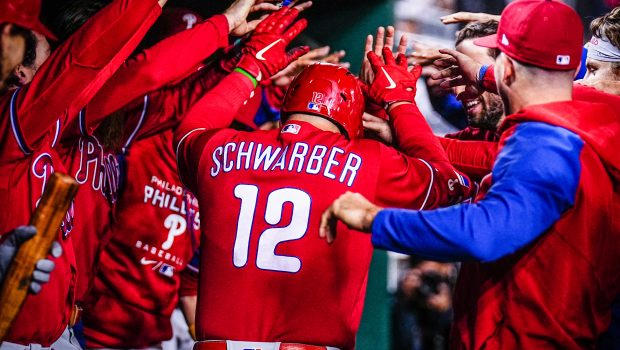 Kyle Schwarber smacked two of the Phillies five homers in the first four innings, salvaging a split of a day-night doubleheader with an 8-2 victory over the worst-in-the-majors Washington Nationals in a rainy Game 2.

The Phillies made it to the postseason every year from 2007-11 — including winning the World Series in 2008 — but haven’t been back since.

Alec Bohm, Brandon Marsh and Matt Vierling also went deep in Game 2 for the Phillies, who quickly recovered from a 13-4 loss in the opener.

That was Philadelphia’s sixth defeat in seven games and left interim manager Rob Thomson answering questions about whether his players were panicking.

“I don’t sense panic,” Thomson said after Game 1. “I really don’t. I sense a group that really wants to get in the playoffs.”

It helped that Schwarber got things going on the second pitch of Game 2 from rookie Tommy Romero (1-1), who was claimed off waivers by the Nationals on Aug. 25.

Schwarber’s sixth leadoff homer of the season, and 19th of his career, landed in the second deck in right.

“That’s what’s special about this team — the ability to forget and move on. That was a really crucial, pivotal moment,” said Noah Syndergaard, who got the win with 5 2/3 scoreless innings as light rain fell for much of the evening. “That got us back on the right track and just going to skyrocket from here.”

Thomson on Syndergaard: “Impressive.” Schwarber’s superlative of choice for the pitcher’s performance: “Massive.”

“Got to have a short memory here,” Romero said.

Schwarber homered off him again to begin the fourth, making it 8-0. That gave Schwarber his seventh multi-homer game of the season, 21st of his career, and raised his 2022 total to an NL-leading 44 long balls.

In the third, Bohm and Marsh hit back-to-back homers, before Vierling added his own homer to an earlier RBI triple.

“That was big,” Thomson said. “Getting out front. Then adding on. … That kind of settled everything down.”

“Any time you feel like you give one away, it’s frustrating,” he said.

In Gibson’s six starts in September and October, his ERA is 9.73 and Philadelphia’s record is 1-5. He has allowed at least five earned runs in three straight starts.

Luke Voit, Joey Meneses and Luis García homered in the afternoon for Washington, which is 55-103.

García, who drove in a career-best five runs, and Meneses, who scored four and knocked in four, each had three hits in Game 1.

That lopsided loss — which included poor pitching, shaky defense and so-so hitting — could have rattled the Phillies.

“We just made sure that we were able to kind of flush that, get it out of our head for tonight,” Schwarber said. “Because if you’re thinking about that stuff, you don’t know what could happen.”