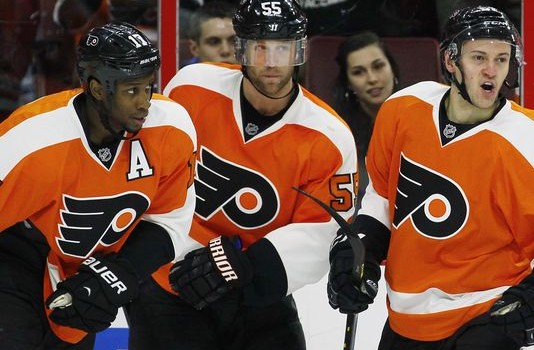 Nick Schultz (center in photo above) was thought to be a spare defenseman when the Flyers signed him last summer.

And on Thursday night at the Wells, he showed why he has become a very important player of the Flyers hope to climb back into playoff contention in a 5-2 victory over the Winnipeg Jets.

Schultz’s first goal in nearly two years was the game-winner; he also was plus-2 in 19:38 of ice time, had two hits and blocked two shots.

Wayne Simmonds and Brayden Schenn each had a goal and an assist, and Chris VandeVelde and Sean Couturier also scored for the Flyers (21-22-7), who won their third straight game. Goaltender Steve Mason made 36 saves.

The game was tied 2-2 early in the second when Schultz saw a puck bounce out of a pile-up in front of the Winnipeg net.

“It was a scramble,” Schultz said. “[Petr Straka and Ryan White] did a good job. The guys were grinding around their net, getting opportunities. Fortunately it popped out, and I wanted to make sure I didn’t miss that one.”

“It’s fun,” Schultz said. “It’s a great feeling. I’d like to score a lot more. Must be nice to be a goal-scorer; you get paid a lot more. It’s fun to chip in, it’s fun to be part of the offense and have an opportunity to put one in.”

An opportunity was something Schultz wasn’t sure he would get when he signed in Philly. He was a healthy scratch opening night at the Boston Bruins, but Braydon Coburn got hurt in that game. Schultz entered the lineup, and the only time he’s left was against the Pittsburgh Penguins on Jan. 20, when he sat out because of an upper-body injury.

In 48 games he has a plus-6 rating, tops among Flyers’ defenders, and is averaging 19:01 of ice time. His 88 blocked shots lead the Flyers.

“Overall he’s been playing really well for us,” said Mark Streit, Schultz’s defense partner the past two games. “He does all the little things, blocking shots, good 1-on-1, and just steady defensively.”

What has helped Schultz is having the confidence of coach Craig Berube and getting to play a consistent role.

“Coming into camp I knew I was on the outside looking in,” Schultz said. “There were a couple injuries early on, and I got a chance to step in sooner and I knew I had to take advantage of it and try to make sure that I played well and prove that I can still play. … It’s been fun to be a part of and fun to be relied on to go out there and play in those situations. It’s fun to go over [the boards] in key moments of the game and be relied upon. That’s what every guy wants.”

After Schultz’s goal put the Flyers ahead, Winnipeg had chances to get back into the game. The Jets outshot the Flyers 13-7 in the third period, but they couldn’t convert on two power plays. They went 1-for-5 on the man-advantage in the game.

Schenn’s 11th goal gave the Flyers a 4-2 lead at 4:12 of the third period. Simmonds made a great individual play to tip a puck past Jets defenseman Toby Enstrom in the Flyers end and then beat him to the loose puck. He got a shot on net off the rush that Hutchinson stopped, but Simmonds beat the Jets’ Zach Bogosian to the rebound, circled behind the Winnipeg net and found Schenn alone in the slot.

It was Schenn’s first goal in seven games, second in his past 23.

“You could see him buzzing early in the game,” Simmonds said. “He had a lot of shots on net (he led the Flyers with five). It was only a matter of time. I was telling him to stick with it. He put that one in, and I’m sure he’s going to go on a streak now.”

Couturier closed the scoring with an empty-net goal with 1:41 left in the third.

The Flyers are nine points behind the New York Rangers for the final Eastern Conference wild-card spot into the Stanley Cup Playoffs. With 32 games remaining in the regular season, the Flyers head into their game Saturday against theToronto Maple Leafs hoping to keep the momentum going.

The Jets lost their second straight game; since a four-game losing streak in early October, they’ve lost back-to-back games six times, but have not lost more than two in a row. Winnipeg is 13-5-1 after losses, and that kind of resiliency has Maurice confident heading into the game Saturday at home against the Dallas Stars.

“It is not as far off as you think here,” Maurice said. “We are not quite as quick maybe as we were when we went into the [All-Star] break, but it always feels more extreme than it is. It is not that extreme. … We played pretty well, but we had a tough trip and we will get back at it when we get home.”