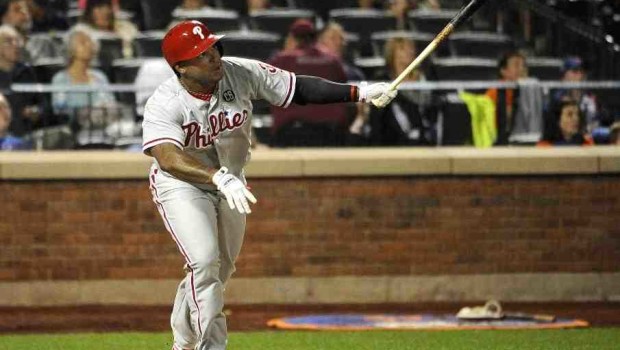 Every once in a while the Phillies resemble the team general manager Ruben Amaro Jr. imagined they would be in 2014.

Jerome Williams pitched into the seventh inning to win his third straight decision since joining the last-place Phillies, who won for the seventh time in nine games. They batted around in the sixth, scoring five runs off Bartolo Colon on seven hits — all singles.

Ben Revere, Jimmy Rollins and Chase Utley singled to start the outburst, loading the bases for Howard. The big slugger lined yet another single to right field, driving in two for a 3-0 lead.

Cody Asche greeted Buddy Carlyle with another run-scoring single before Philly was finally retired in a half-inning that took just short of 20 minutes.

Philly banged out 12 hits to back another solid performance from Williams (3-0), who gave up two runs and four hits in 6 1-3 innings. Facing the Mets for the first time since 2007 with Washington, the 32-year-old journeyman from Hawaii was virtually untouchable for the first six innings.

Williams, who is 5-5 overall this year, has enjoyed a resurgence since he was picked up off waivers from Texas this month. Pitching for his third team this season, the right-hander has a 2.03 ERA in four starts with the Phillies.