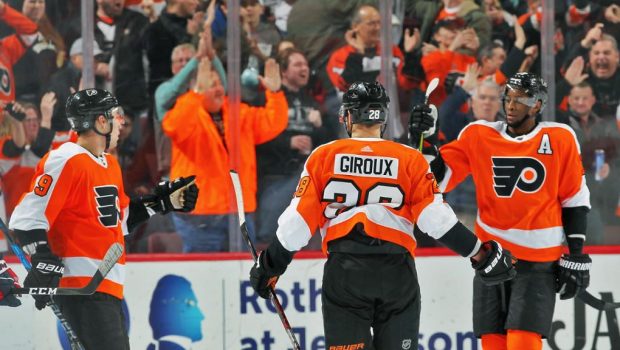 So, which Flyers will show up down the playoffs stretch?

The lackluster bunch that went through a losing streak a couple of weeks ago or the energized team that skunked the Washington Capitals yesterday 6-3 and are now four points behind the Caps for first place in the Metro?

Wayne Simmonds had two goals, and Shayne Gostisbehere, Oskar Lindblom, Ivan Provorov and Jakub Voracek scored for the Flyers, who notched a 4-2 win against the Carolina Hurricanes on Saturday. Petr Mrazek made 25 saves.

The Flyers (37-25-11), who are 3-2-0 in their past five games, trail the Pittsburgh Penguins by two points for second in the Metropolitan and lead the Columbus Blue Jackets by two for third.

“We just want to make the [Stanley Cup] Playoffs,” Simmonds said. “We’ve got nine games left. We’ve got to get as many points as we can and whatever happens, happens.”

John Carlson had a goal and an assist, and Alex Ovechkin andChandler Stephenson scored for Washington (41-24-7), which lost for the first time in five games. Philipp Grubauer made 29 saves.

The Flyers took the lead with two goals in 1:22 late in the second period.

Lindblom scored his first NHL goal, in his 14th game, off a pass from Voracek at 18:19 to put the Flyers ahead 2-1. Then Provorov’s shot from the left point through traffic deflected off Capitals defenseman Christian Djoos and past Grubauer at 19:41 to make it 3-1.

The goal by Lindblom came one night after he got his first NHL point, an assist on a third-period goal by Voracek.

“He’s getting his confidence,” Gostisbehere said. “Good to see him not only score a goal, but a huge goal at a pivotal point in the game.”

The Flyers went ahead 4-1 when Simmonds redirected a Robert Hagg shot at 1:37 of the third period.

Simmonds got his second of the night, off a Capitals turnover, to make it 5-2 at 14:27. It was his first multigoal game since he had a hat trick in the season opener, at the San Jose Sharks on Oct. 4.

“For me, it’s do whatever I can do to help the team,” Simmonds said. “Whether I’m scoring or not scoring, I’ve got to be doing something on a nightly basis that’s helping us get the two points.”

Voracek made it 6-3 with an empty-net goal with 38 seconds remaining.

Washington leads Pittsburgh by two points for first in the Metropolitan, but forward Jay Beagle said the Capitals need to be more aggressive.

“We have to start playing playoff hockey,” he said. “You have to start right now. Teams that are fighting for spots and teams that are a little more desperate, we have to match how desperate they are and we have to go after them rather than sitting back and waiting for the game to come to us. … We’ve got to learn from this and make sure we don’t let it happen again, especially going into these last 10.”

Gostisbehere scored on a one-timer at 2:15 of the second to give the Flyers a 1-0 lead.