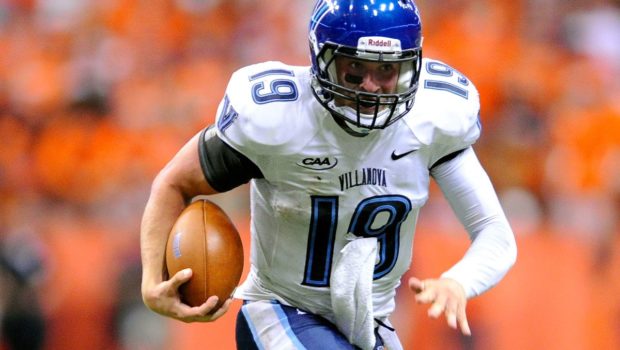 Jack Schetelich passed for one touchdown and ran in two more to lead Villanova to a 24-9 win over Towson last night in Towson, Md..

Both of Schetelich’s rushing touchdowns were set up by fumble recoveries in the fourth quarter. The first came when Julian Williams recovered Ryan Stover’s fumble at the Towson 8 and Schetelich scrambled into the end zone on the next play. Then, with 3:12 left, Stover again fumbled — this time while being sacked — and Malik Fisher recovered it at the Towson 11, with Schetelich taking it in for the final score of the game on the next snap.

Villanova (3-2, 1-1 Colonial Athletic Association) also struggled with turnovers. Schetelich threw three interceptions and was just 5 of 15 for 59 yards passing. In the game’s opening possession, he connected with Taurus Phillips for a 7-yard touchdown to cap a 15-play, 75-yard drive.

Drew Kresge had a 46-yard field goal in the third quarter to put Villanova back on top for good.

Monty Fenner intercepted a pass from Schetelich in the second quarter, setting up a 3-yard touchdown run by Stover six plays later. Aidan O’Neill missed the PAT kick but Towson edged into a 9-7 lead in the second half with a 65-yard drive capped by O’Neill’s field goal.