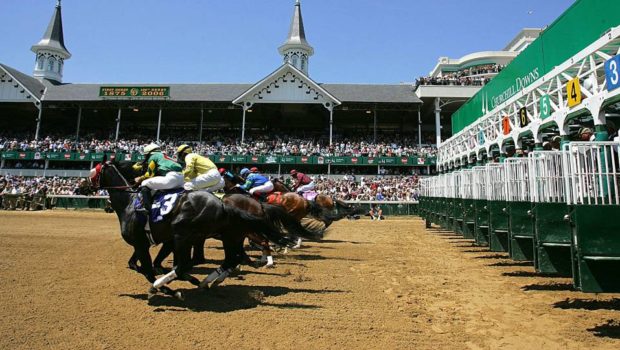 Bob Baffert is sitting out this Saturday’s Kentucky Derby, not by choice.

Having the four-time Derby-winning trainer without at least one horse in the race for just the second time in 11 years indicates what an unpredictable winter it’s been leading to the start of the Triple Crown.

Baffert’s best horse, Mastery, got hurt after crossing the finish line first in the San Felipe Stakes. None of his other 3-year-olds developed into Derby material. Instead, he’ll aim for the $1 million Kentucky Oaks for fillies on Derby eve.

This year’s road to the 143rd Derby derailed other contenders because of injuries, including now-retired Not This Time, Klimt, and Syndergaard.

‘‘The amazing thing of getting a horse to the Derby is keeping him injury free,’’ said Doug O’Neill, who trained last year’s winner Nyquist.

For the first time in four years, the winner likely won’t be from California.

‘‘It’s as wide open as we’ve seen in a long time. You’re going to have some big odds on whoever the favorite is,’’ said Dale Romans, who trains Gotham Stakes winner J Boys Echo. ‘‘It could be any horse this race. I don’t think this really means it’s a bad group of horses, I think it’s an even group of horses.’’

There’s Classic Empire, who boasts an impressive résumé as last year’s Breeders’ Cup Juvenile winner and champion 2-year-old. He won the Arkansas Derby and finished third in the Holy Bull Stakes, his only two starts this year.

His path to Churchill Downs hasn’t been smooth, however. He had a foot abscess and a back issue that prevented him from working out for a while. Twice in recent months, Classic Empire refused to train.

‘‘I’ve never once counted him out. I know a lot of people have,’’ trainer Mark Casse said. ‘‘I feel that ability-wise, he is the most talented horse out there right now.’’

Todd Pletcher has four horses set to run May 6 in the 1¼-mile race, with Florida Derby winner Always Dreaming as his leading contender.

Of course, big numbers are nothing new for the New York-based trainer.

He had five runners in 2013 and 2007. Yet for his 45 career starters, Pletcher has never had a Derby favorite. That could change this year with Always Dreaming, who had the fastest time among 35 horses going 5 furlongs at Churchill Downs on Friday.

‘‘He’s got the right style to be really tough,’’ O’Neill said.

Pletcher’s lone victory came in 2010 with Super Saver. He is set to surpass mentor D. Wayne Lukas (48) for most career starters.

‘‘Our Derby record is not as good as we’d like it to be,’’ he said. ‘‘We’ve had some horses overachieve on their way to getting there, and in some cases underachieve in the race itself.’’

Besides Always Dreaming, Pletcher’s other horses are: Battallion Runner, Patch, and Tapwrit.

There’s Girvin, the Louisiana Derby winner in a race against time to mend a crack in his right front hoof. His 32-year-old trainer, Joe Sharp, the husband of retired jockey Rosie Napravnik, is doing everything he can to heal the colt in time to saddle his first Derby starter. Girvin had a similar crack earlier in the year and responded quickly to treatment.

‘‘I’m not saying that I think I’m going to win the Derby, but I definitely wouldn’t trade places with anybody,’’ Sharp said. ‘‘He’s always consistent and he’s got the kind of running style that wins big races.’’

As usual, a full field of 20 is expected. The final lineup won’t be known until Wednesday, when entries are drawn and post positions assigned.

Graham Motion, who trained 2011 Derby winner Animal Kingdom, is back with Irish War Cry, the Wood Memorial winner. His sire is Curlin, a two-time Horse of the Year who finished third in the ’07 Derby.

Still looking for his first Derby win is Steve Asmussen, who will saddle Hence and Untrapped. The trainer has two starters waiting in the wings, too. Lookin At Lee would be the next horse into the race if there are any defections, while Local Hero is No. 24 in the points standings.

Olympic skier Bode Miller recently bought into his first Derby starter, Fast and Accurate, winner of the Spiral Stakes. For years, Miller has been a guest of his pal Baffert during Derby week, but now he’s got some skin in the race.

For the fifth straight year, the field is determined by points from designated prep races. The top 20 earn a spot in the starting gate.