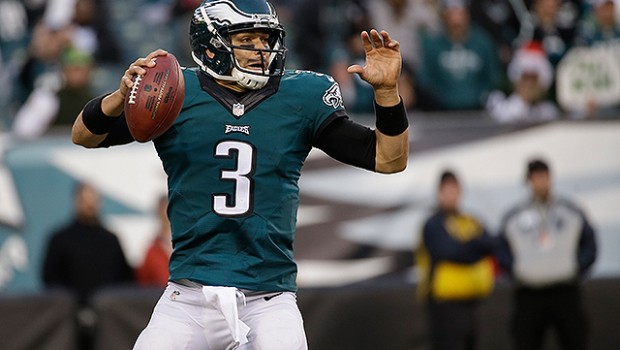 SANCHEZ, THE PICK MACHINE — ‘WE HAVE TO WORK ON THAT’

Overlooked in the euphoria of the Eagles 43-24 victory over the Titans Sunday at the Linc was quarterback Mark Sanchez’ career-long predilection to throw interceptions — he had two passed picked off.

The first one came early in the second quarter on a pass over the middle intended for wide receiver Riley Cooper with the Eagles ahead 17-0 and led to a Tennessee touchdown and a brief comeback.

The second one came late in the third quarter on a ball down the middle intended for tight end Zach Ertz, with the score, 34-17, but didn’t hurt when the Titans turned it back over on he next series.

“No, they can’t happen,” Sanchez said. “The first one (Riley) Cooper and I weren’t on the same page. He expected one thing and I expected something else. We have to work on that.

“The second one there’s no excuse. Ertz ran a great route and I just air-mailed it. This time of the year I can’t make passes like that.”

Sanchez finished the day 30-for-43, for a season-high 69.7 percent, with 307 yards, a touchdown and the two interceptions. His 78.3 passer rating was his lowest of the season.

“A couple of years ago, the two interceptions would have eaten away at me,” Sanchez said. “Now, I understand there’s no time to worry about that. There’s just time to fix it. For us, or any team, to be successful, you can’t have those turnovers.”