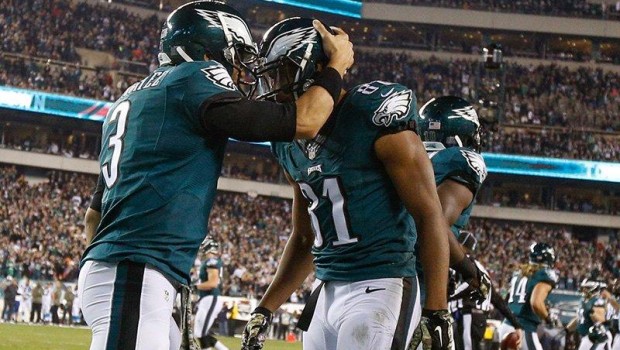 You would think these two are old buddies, sort of like George Clooney and Matt Damon or Bob Hope and Bing Crosby.

Or Mike Missanelli and Howard Eskin. Whatever the comparison, Mark Sanchez and Jordan Matthews have become the Eagles’ best bromance and it has contributed to last night’s break-out game for both.

While Sanchez’s starting debut for the Eagles garnered exaltations from the far reaches of the Internet, one important aspect became clear Monday night: the quarterback loved finding rookie receiver Matthews.

“I felt like I was Jeremy Maclin,” Matthews joked, per the team’s official website. “…. If you take too much time looking at the stats and drinking the Kool-Aid, you lose your appetite. I just try to put it behind me and move forward.”

It’s no surprise that the rookie had by far his most productive day as an NFL player — 138 yards on seven catches (19.7 average) and two touchdowns — in Sanchez’s first start.

“Of course we had something going on in camp,” Matthews said. “We kind of had to. We were both on the second-team at the time. So, I took the majority of the reps with him. After practice, I made sure I got extra reps with him. I knew that if I wanted to break into the lineup, I had to look good with the second-team first. That was definitely a point of emphasis for me back then. We continued to have a great relationship.”

Matthews seemed to be open all night as Chip Kelly’s offense exploited the soft middle of the Carolina Panthers’ defense in the 45-21 blowout win.

“You can’t say enough about him,” Sanchez said of Matthews. “I don’t want to say too much because he’ll get a big head, his hat won’t fit. But he’s such a talent.”

A talent that appears to have a tight on-field relationship with a man who’s now the starting quarterback.