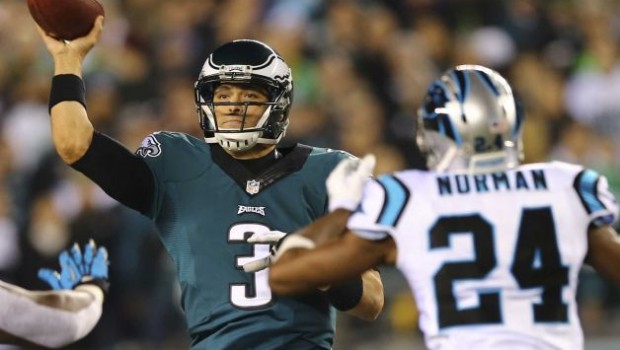 If there has been one consistent criticism of the Eagles’ offense, dating to the Andy Reid and Donovan McNabb Salad Days 10 years ago, it was that they have had trouble scoring in the Red Zone.

You know, that patch of land from the 20-yard line to the goal line.

How many times have the Birds settled for a FG when they had a chance for a TD?

Mark Sanchez debuted last night on MNF before a national TV audience and he was 5-for-5 in the Red Zone..

In his game-plus for the Eagles, Sanchez in 7-for-7 in the red zone with seven touchdowns.

If there is any glaring difference between what Sanchez has done in a game-plus as the Eagles quarterback this season and what Nick Foles did in seven-plus games it has come inside the opponent’s 20 yardline.

Under Nick Foles, the Eagles were a really bad 8-for-24 scoring touchdowns in the red zone and you could blame both of their losses, to San Francisco and Arizona, because of their inefficiency in the red zone.

On the whole Sanchez, making his first start since 2012, played more than well enough. He was aided by a defense that just made the Panthers offense irrelevant and turned quarterback Cam Newton into the Sanchez Jets’ fans remember.

The one Eagles fans saw Monday night completed 20 of 37 passes for 332 yards with two touchdowns and no turnovers for a quarterback rating of 102.5.

And most importantly went 5-for-5 in the red zone.