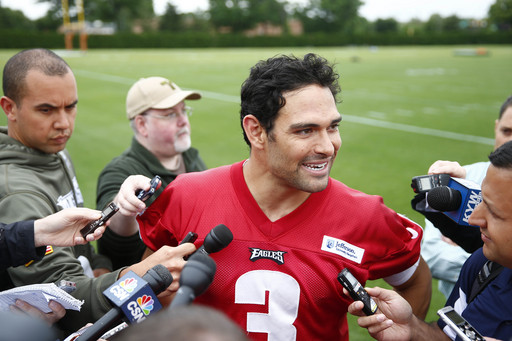 SANCHEZ IS THE EAGLES' HAPPIEST CAMPER

One guess as to who is the most upbeat player in the Eagles’ preseason workouts.

Mark Sanchez has gone from being the Jets’ “Sanchize” to being Nick Foles’ backup with the Eagles, but Sanchez said his rank on the depth chart is of little concern. After missing all of the 2013 season because of a preseason shoulder injury, he’s turned the page on his five years with the Jets and is looking forward to his future in Philly.

“I’m not going to do the comparison thing,” Sanchez said after Thursday’s organized team activities. “I loved everything that happened there [with the Jets]. Everything. Good, bad, ugly, don’t care. It was an awesome time.

“But I’m an Eagle now. I love being here. This is the best place I could have landed.”

Coach Chip Kelly said Sanchez isn’t limited by his shoulder and can make every throw in practice. But he still is getting acclimated to the Eagles’ system and made several errant throws while working with the second team Thursday.

Sanchez’s March release from the Jets and subsequent transition to a new city haven’t been easy, but he remains an optimist who believes he’s “just entering the prime of my career.”

“Maybe this whole shoulder thing and relocation has just been a blessing in disguise,” Sanchez said. “Maybe that year off was exactly what I needed. Got a little rest for my legs, for my arm, and I feel great.”

Sanchez said he had other options this offseason, but the allure of playing for the Eagles — a team “on the rise,” he said — was too difficult to ignore.

“I just kept thinking, ‘Eagles. This is the place to be,’ ” Sanchez said. “I really respected what they did last year . . . And I think they have a ton of talent, especially at the wideout position, tight end position. They’re just overflowing with guys that can play. So that’s exciting for a quarterback.”

And that’s something he didn’t always have with the Jets.

“I was really drawn here because of the offensive minds here,” he said. “I think what they did last year was just the tip of the iceberg.”

And while he loved playing for and respected Rex Ryan, a defense-oriented coach, Sanchez said, “I enjoy — obviously selfishly — the offensive side of the ball. But you have a ton of respect for the opposite side of the ball, as you should.”

With Foles already tabbed as the Eagles’ starting quarterback, Sanchez knows there’s a chance he will not get an opportunity to start in 2014. But after being unable to toss a football for so long, he’s happy just to be on the field again.