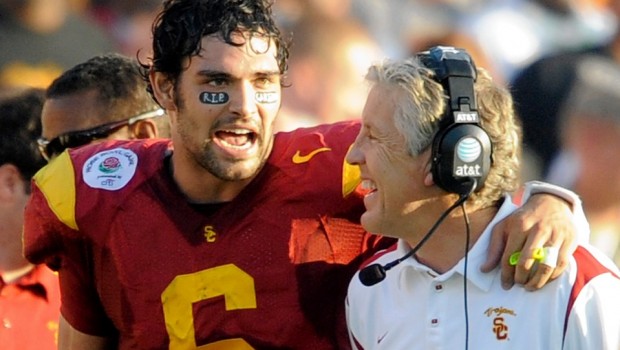 SANCHEZ CAN TEACH HIS OLD USC COACH A BIGTIME LESSON

Carroll urged his 2009 Rose Bowl-winning quarterback against leaving a year early only to have Sanchez bolt for the NFL.

Tomorrow’s Eagles-Seahawks match-up at the Linc is the game of the week in the NFL and it has many subplots.

And one of them is that Birds QB Mark Sanchez gets another crack at teaching his college coach a lesson.

Sanchez, who has taken over as the starting quarterback of the Eagles (9-3), faces Pete Carroll’s Seattle Seahawks (8-4). The matchup is critical to both teams’ hopes of winning their respective divisions. But a subplot is the uncommon sight of a quarterback facing his former college coach.

In 2012, Sanchez, starting for the New York Jets, got thumped by Carroll—his coach at Southern California—and the Seahawks 28-7. Carroll, who coached at USC from 2001 to 2009, has split four previous contests against his former quarterbacks. Carroll has gone 1-1 against Carson Palmer and lost to Matt Cassel.

The Carroll-Sanchez rivalry has some history, as Carroll criticized Sanchez’s readiness for the NFL when the quarterback left USC early to enter the 2009 draft. In their matchup in 2012, Sanchez completed just 9 of 22 passes for 124 yards and an interception. But Sanchez is now leading coach Chip Kelly ’s wide-open Eagles offense and playing the best football of his career, averaging a career-high 8 yards per pass attempt.

And the game may come down to the battle between Sanchez and the Seahawks’ secondary.

The Seahawks have surrendered a total of six points in wins over the Arizona Cardinals and the San Francisco 49ers by identical 19-3 results.

If the 9-3 Eagles lose to the Seahawks, next week’s game against the Dallas Cowboys would have added importance since both would be 9-4. The 8-4 Seahawks are a game off the NFC lead as they attempt to hit the postseason running with remaining games against the 49ers, Cardinals and St. Louis Rams.

Carroll urged his 2009 Rose Bowl-winning quarterback against leaving a year early only to have Sanchez bolt for the NFL. Sanchez is still prone to turnovers. And Carroll has just the pressure defense to coax an interception or two from his former protégé’.

As cornerback Richard Sherman explained, the Seahawks have stopped up-tempo offenses before, throttling Peyton Manning and the Denver Broncos in the Super Bowl. The difference is that the Broncos didn’t boast Philly’s dynamic running tandem of LeSean McCoy and Darren Sproles.