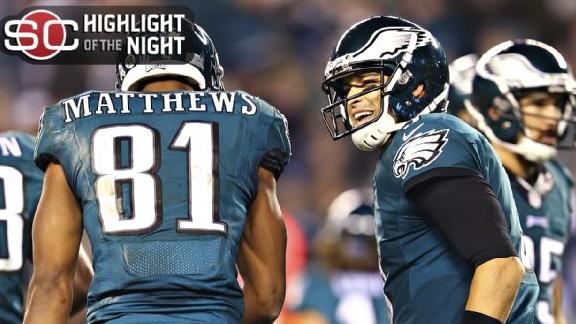 Sanchez and Matthews have become the Eagles’ Batman and Robin.

All week long the naysayers on Philly talk radio were doubting that Mark Sanchez could be the Eagles’ savior and not just their Quarterback Of Record as he steps in for injured Nick Foles.

So, what do you think of Sanchez now, overpaid blowhards? Sproles salutes the vets after his TD run.

Darren Sproles had two touchdowns — a 65-yard punt return and an 8-yard scamper from scrimmage — Bradley Fletcher had a 34-yard pick six and rookie wideout Jordan Matthews had 138 yards and two TDs and the defense sacked Cam Newton NINE TIMES as the Eagles beat the Carolina Panthers 45-21 Monday night at the Linc.

“Just an outstanding performance by all three phases,” Sanchez said about the Birds’ performance on ESPN’s Monday Night Football..

The Eagles (7-2) stayed on top in the NFC East. They’re trying to repeat as division champions without Foles, who broke his collarbone in a win at Houston last week.

The Panthers (3-6-1) hardly look like the team that won the NFC South last year. They’ve lost four in a row and already have allowed more points in 10 games than they did in 2013. Making things worse, Panthers defensive tackle Star Lotulelei was carted off the field late in the third quarter.

Newton threw the first of three interceptions and DeAngelo Williams lost a fumble on Carolina’s first three plays from scrimmage. The turnovers led to 10 points for the Eagles.

Connor Barwin had 3½ sacks and Brandon Graham had 1½. Newton had never been sacked more than seven times in his career.

“We wanted to keep Cam in the pocket and if we didn’t, we didn’t want him to go north, we just wanted him to go east and west and we did that,” Barwin said. “Nobody gave him a hole to rush through. Everyone stayed disciplined and he didn’t really know where to go when he tried to escape.”

Sanchez, the former franchise quarterback for the New York Jets, signed a one-year deal to back up Foles after missing last season following shoulder surgery.

Though he led the Jets to the AFC championship game his first two seasons, Sanchez didn’t live up to expectations in New York after being picked fifth in the 2009 draft.

But one day before his 28th birthday Sanchez had one of the best games of his career in his first start in Chip Kelly’s up-tempo, quarterback-friendly offense.

“After playing for a while, you learn a lot,” he said. “I’ve made plenty of mistakes and hurt the team. The most important thing was taking care of the football, communicating well and executing. If we do that, generally we’ll be successful. There are still plenty of things to clean up though. By no means was this perfect.”

Cary Williams then intercepted Newton on Carolina’s next offensive play. It was the first pick by an Eagles cornerback this season.

“Our defense really came to play,” Kelly said. “We created a lot of pressure early and those two turnovers on the first three plays really set the tempo for the day.”

Sanchez completed passes of 15 yards to Jeremy Maclin and 21 yards to Brent Celek to set up Sproles’ score. Sproles took a handoff and ran off the left side untouched.

The Panthers answered on their ensuing possession. Newton connected with Greg Olsen on a 38-yard pass and converted a pair of third-down passes to keep the drive going. Jonathan Stewart jumped over the top from the 1 to cut it to 10-7.

Sproles broke loose up the middle, deked punter Brad Nortman and cut to the right sideline on his way to his second punt return for a score this season and fourth in his career, giving the Eagles a 17-7 lead.

Fletcher stepped in front of a poor pass intended for Jason Avant and ran it back to put the Eagles up 31-7. The Eagles already have a franchise-record nine touchdowns on defense and special teams.

“I have to protect the football better,” Newton said. “I can’t throw the football up for grabs and have to understand the difference between giving my guys a chance or opportunity and risking the football. In the pocket, man I got to do better.”

LeSean McCoy ran in from the 1 to make it 38-7. Matthews caught an 18-yard TD pass in the fourth quarter.