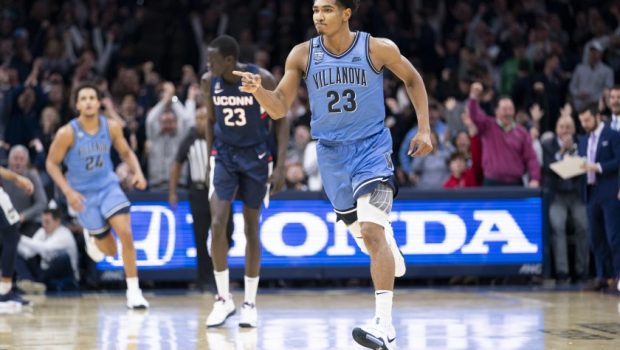 Jermaine Samuels made the decisive three-point play that put No. 14 Villanova ahead for good in a 61-55 win over Connecticut.

The Huskies (10-7) kept it close against their pending Big East rival and attacked the paint with authority to offset a miserable effort from 3-point range (2 of 15). Christian Vital fought through the lane and tossed in a layup that brought the Huskies within two with 24 seconds left. But a full-court press on Villanova came up empty and Jeremiah Robinson-Earl sank two free throws to secure the Wildcats’ 10th win in 11 games.

Collin Gillespie scored 12 points and Villanova made 11 of 23 3-pointers.

Vital led the Huskies with 13 points and eight rebounds.

Gillespie averaged 15.1 points and hit a team-high 38% of his 3s entering the game but was shut down in the first half: he went scoreless on 0-for-3 shooting. Once he started scoring, the Wildcats started rallying. Gillespie hit consecutive 3s and scored 10 straight points to help bring the Wildcats back from six points down to a 43-all tie with 7:43 left.

But Villanova’s leading scorer, Saddiq Bey (15.4 points), went scoreless the rest of the game after scoring nine points in the first 7 minutes.

Bey had the ball knocked loose at midcourt and Vital snagged it for a driving layup and a 37-33 lead. The Huskies scored on 10 straight possessions — all 2-point buckets — until a missed 3 ended the streak, but with a six-point lead.

The Wildcats were 10½-point favorites against DePaul and needed overtime Tuesday at home to survive a serious scare and win by four. The Wildcats were 9½-point favorites against UConn and were tested early until they shook off a rut in the beginning and connected from long range. Bey hit back-to-back 3s to bring the Wildcats within one and Justin Moore sank one for their first lead. Robinson-Earl made one and Bryan Antoine hit his second career 3 to send Villanova into halftime with a 27-21 lead. Six of Villanova’s 10 baskets were 3-pointers and UConn connected on just one.

The 3 ball was the difference in a sluggish half; the teams combined for 14 points over the final 10 minutes in front of a sleepy crowd.

The game wrapped a three-season series that included a game in Connecticut and one at Madison Square Garden. The rivalry will be renewed on a more permanent basis next season when UConn leaves the American Athletic Conference to rejoin the Big East.