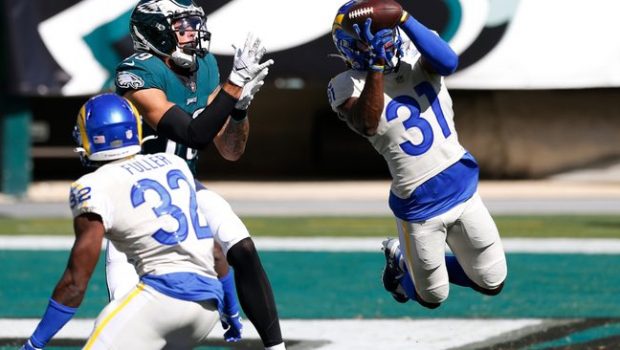 After the Eagles loss to the Rams on Sunday, Carson Wentz discussed his and the team’s failings, and began sounding like any losing coach — Andy Reid, Brett Brown, you name it — after another Philly loss.

The Eagles had first-and-10 at the Rams 21, trailing by five points near the midpoint of the third quarter, and after the defense forced a three-and-out to begin the second half, the Eagles had a golden opportunity to take their first lead of the game after falling behind by three scores early in the first half.

But when the Wentz launched his pass Rams cornerback Darious Williams undercut JJ Arcega-Whiteside and pulled the ball in. The drive was over.

The Rams added a field goal on the ensuing possession to stretch their lead to eight, and the Eagles never again got closer than five in the eventual 37-19 loss.

“They made a great play,” Wentz said on a Zoom call after the game. “I got out on the naked there to the left, and they had us covered pretty well. I got pretty aggressive, tried to force one in there. Guy made a great play, so I gotta be smarter than that in that situation.”

For the second straight game, Wentz’s turnovers loomed large in an Eagles loss. In Week 1, the Washington Football Team turned two Wentz interceptions into 14 points in a 27-17 comeback win over Philadelphia. On Sunday, the Rams turned one Wentz interception into a field goal and used his second to ice the game. They also turned a Miles Sanders fumble into a touchdown.

It’s a troubling theme early in the 2020 Eagles season. Wentz had never thrown multiple interceptions in back-to-back games before the past two weeks. The Eagles are now 1-8 when he throws at least two interceptions. And after throwing seven interceptions in each of the past three seasons, Wentz has four in two weeks.

“The one thing that, again, we all have to take a look at, especially offense, is the turnovers,” coach Doug Pederson said after the game. “We had the fumble early and of course the interceptions. That’s been, I think these first two weeks of the regular season, that’s been sort of the tale of the tape.”

Wentz’s third quarter pick was particularly gutting. After allowing the Rams to score touchdowns on each of their first three possessions to take a 21-3 lead, the Eagles had finally found some stability. Defensive end Brandon Graham sacked Jared Goff late in the first half to push the Rams out of field goal range, and linebacker T.J. Edwards forced a fumble on a punt return to set up a short field for Sanders to score his first touchdown of the season right before half.

The Eagles trailed 21-16 when the defense forced a punt on the Rams’ first possession, and Wentz had the offense humming on the drive with three completions to wide receiver DeSean Jackson, a 12-yarder to tight end Zach Ertz and some strong carries by Sanders.

But then he looked to Arcega-Whiteside, who he didn’t target at all in Week 1, and the two could not connect.

“I was just moving to my left and saw J.J. had a step on his guy, really just trying to force it in there before the free safety,” Wentz said. “Obviously, not what I should have done. Guy undercut it, made a great play and yeah, that definitely — we had some good momentum that drive going, we were moving the ball well. Tried to do too much, tried to make a play and obviously can’t do that.”

The Eagles later cut the lead to 24-19, but the defense could not hold down the Rams offense, and the Eagles offense could not muster any response to LA’s two second-half touchdowns.

Through the first four years in his career, Wentz was well-regarded for his ability to avoid interceptions. He still had ball security issues with 48 fumbles in four seasons, but his career interception rate of 1.7% — it was 1.2% last season — helped mitigate his turnovers. He was among the best in the NFL at not throwing interceptions.

But through two weeks, Wentz has regressed. His interception rate is 4.7%, and it’s proved costly for the Eagles.

There are plenty of issues for the team to sort out in the coming weeks as it attempts to climb out of its 0-2 hole, but Wentz’s costly interception in the direction of Arcega-Whiteside could loom large this season.

“Just a situation where we’ve just got to continue to keep working,” Pederson said. “If plays are not there, don’t look to try to make something happen. Just throw the ball away in that situation or run. Unfortunately, it was a turnover in the end zone, and we’re just going to continue to correct and move forward.