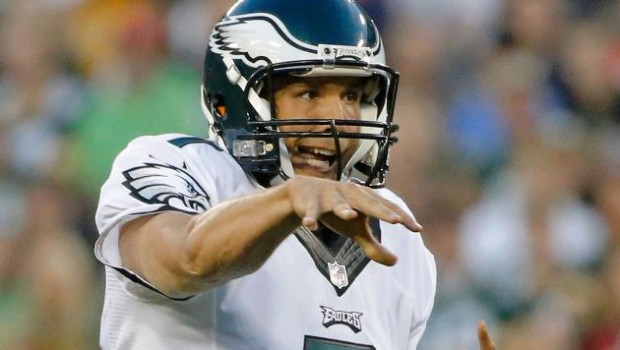 SAM IS THE KEY TO CHIP KELLY’S UNSTOPPABLE EAGLES OFFENSE!

Chip Kelly and what he has wrought in Philly has become the envy of the entire NFL.

Kelly’s offensive system has looked very good for the Eagles for the past couple of years. However, this preseason, it has looked virtually unstoppable.

For the preseason, the Eagles are ranked first in scoring offense (33.2 points per game) and first in total offense (404.2 yards per game). The team has the league’s reigning rushing leader in DeMarco Murray and a capable backup quarterback in Mark Sanchez.

What has stood out the most this preseason, however, is how good offseason acquisition Sam Bradford has looked under center for the Birds.

Bradford has completed 13 of 15 passing attempts for 156 yards with three touchdowns, zero interceptions and zero sacks. He was rated ninth overall among quarterbacks by Pro Football Focus for the preseason.

Kevin Patra of NFL.com recently explained why it appears Kelly finally has his ideal quarterback:

Bradford’s accuracy has been on point during his little time this preseason. His pinpoint ball placement has returned to the level he displayed while at Oklahoma, which caused NFL scouts to drool and the St. Louis Rams to make him the No. 1 overall pick. While Bradford hasn’t uncorked the deep ball in limited snaps this preseason, his precision is a perfect meld with Chip Kelly’s offense.

The team has insurance for Bradford, who has had a torn ACL in each of the past two years, because the Eagles retained Sanchez during the offseason. This is smart long-term planning and makes the Eagles offense look even better.

Trying to shut down this group is going to be a tough task even for the best defenses in the league.