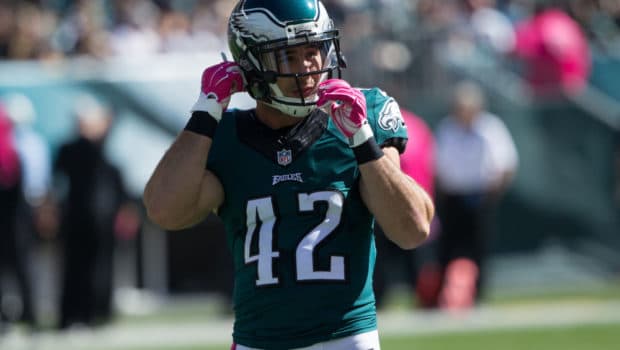 SAFETY IN NUMBERS: HOW MANY WILL THE EAGLES KEEP?

The Eagles must get down to 53 players today at 4 p. m., and one of their toughest decisions will be:

How many safeties will they keep?

Keeping five sounds crazy, but they are in a unique situation. Jaylen Watkins has cemented a spot as the No.3 safety behind Rodney McLeod and Malcolm Jenkins.

Watkins is capable of playing cornerback if asked to. His versatility hurts the chances for back-end roster corners such as C.J. Smith and JaCorey Shepherd.

Additionally, McLeod and Jenkins have dropped down and played in the box against the run as well as covering slot receivers. The coaching staff has been impressed with the way Smith has progressed during training camp.

Shepherd started camp as the second-team nickel back. The top five corners are set with Leodis McKelvin and Nolan Carroll as the starters. Eric Rowe, Ron Brooks and Jalen Mills round out the rotation.

At safety, Chris Maragos (above) has been a special teams stalwart for the Eagles. He more than likely makes the team because of that. The wild card becomes Ed Reynolds.

Reynolds started down the stretch for the Eagles last season. He is also a special teams player. His performance against the New York Jets was highlighted by a 90-yard interception return and multiple big hits. It will come down to Reynolds, Smith or Shepherd. Who makes the cut?