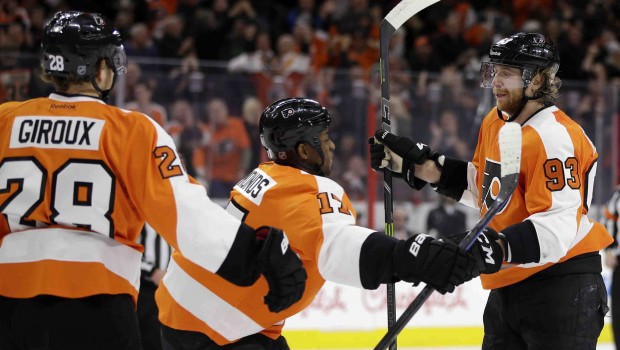 Say what you want about the Flyers’ recent rally — sorry about that loss to the Blue Jackets! — that has them climbing in the playoff race against Boston, they have been doing it with no help from their two top players.

Jakub Voracek and Claude Giroux are among the league leaders in points, but they haven’t been productive lately.

The Flyers hope their high-scoring duo can end their scoring woes tonight at the Wells against theBuffalo Sabres.

These players have been very productive with Voracek registering 60 points – two shy of his career high – and Giroux 55. Voracek is second on the team with 18 goals and Giroux third with 16.

The problem is that neither has been able to score lately. Voracek’s only goal in his last 14 games went into an empty net, and Giroux has gone a season-worst nine straight games without scoring.

“I think that’s what we did in the beginning of the season even if we didn’t have a good game, we find a way to score the goals which obviously we don’t do lately but like I said as a team, we’ve played well over the last 10 games which is really important,” Voracek said.

Coach Craig Berube has shuffled his top line to include Michael Raffl with Voracek and Giroux. Raffl is fourth on the team with 13 goals.

“I think we created a lot of chances, just couldn’t find the net yesterday,” Raffl said. “I have been playing with them for a couple games now so I think it’s good chemistry there, everybody sees that and it’s funs to play with them.”

Wayne Simmonds has four goals and three assists during a five-game point streak. He leads the club with 22 goals but has none in his last nine games against Buffalo.

The Flyers seek to recover with a sixth straight win over the Sabres. Philadelphia has taken the first two meetings this season on the road, including Sunday’s 2-1 victory in which Raffl and Matt Read scored.

Michal Neuvirth is 0-10-1 with a 3.35 goals-against average in his last 12 starts. He has surrendered six goals in losing both 2014-15 matchups with the Flyers.

Buffalo fell to 0-3-1 in its last four with Tuesday’s 2-1 shootout loss at New Jersey. Tyler Ennis scored his 14th goal to tie Zemgus Girgensons for the team lead and Neuvirth made 34 saves.

”I felt pretty good,” Neuvirth said. ”I only let one get by me, so I’ll take that as a positive. The more I play, the more comfortable I feel.”

The Sabres also have the NHL’s worst penalty kill at 73.8 percent while the Flyers have one of the league’s best power plays at 23.2 percent. Philadelphia is 2 for 5 in the season series.