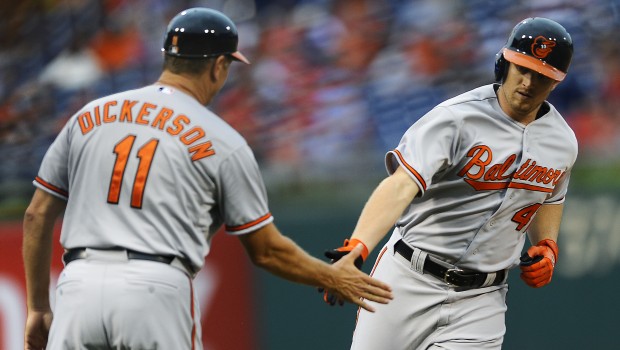 Who is it who said home cooking and a familiar bed can cure much of what is wrong with a baseball team?

No one who has watched this year’s Phillies!

A night after setting a club record with eight home runs in a defeat of Phillies, Chris Parmelee (above) homered for the third time in two games and Travis Snider added a HR as Baltimore handed the Phillies their ninth straight defeat, 6-4 Wednesday night.

The Orioles still finished six homers shy of the club record they set in Tuesday’s 19-3 victory over the Phillies. David Lough doubled and had two RBIs for Baltimore, which won its 12th game in the last 14.

Ubaldo Jimenez (5-3) struck out eight and walked none while giving up four runs on eight hits in 6 2/3 innings. Zach Britton pitched a scoreless ninth for his 18th save.

”When you go against a team that is struggling, you have to put your foot on the pedal and give everything you have,” Jimenez said. ”We know because we’ve been there. The last few weeks, we’ve been putting everything together.”

Freddy Galvis homered and Ben Revere had a pair of hits, including a triple for the Phils, which has lost 19 of 22 to sink to 23 games under .500. The Phils have been outscored 57-18 during the skid while getting outhomered 19-2.

The Phillies returned home after a historically bad road trip in which they lost all eight games, marking the first time since their inaugural season in 1883 that they went winless on a road trip of at least eight games.

They didn’t do any better at home. At least the bullpen phone stayed on the hook this time.

Adding to the embarrassment of Tuesday’s blowout in Baltimore, Sandberg was unable to get a reliever warming up to spell outfielder Jeff Francoeur, filling in as a reliever, because the bullpen phone was off the hook. Pitching coach Bob McClure ended up waiving a white towel to get the bullpen’s attention. In the end, no one was called in to relieve Francoeur, who threw 48 pitches in two innings, prompting Chase Utley to bark at McClure during a mound visit. Francoeur was out of the starting lineup Wednesday and grounded into a game-ending double play as a pinch-hitter.

”It’s a mishap that can happen, but can never happen again,” Phillies GM Ruben Amaro Jr. said before Wednesday’s game.

Baltimore tallied four unearned runs in the fourth inning that started when Galvis committed his 10th error of the season when he couldn’t field Snider’s grounder to short.

The Phillies had a chance to get back in the game in the bottom half when Maikel Franco singled and Ryan Howard doubled to put runners on second and third with no outs. But three straight strikeouts, by Domonic Brown, Cameron Rupp and Cody Asche, erased the threat.

”Those things add up,” Sandberg said.

Correia, who was making his second start for the Phillies and third in the big leagues since last August, allowed six runs – two earned – and seven hits in five innings with four strikeouts and a walk.