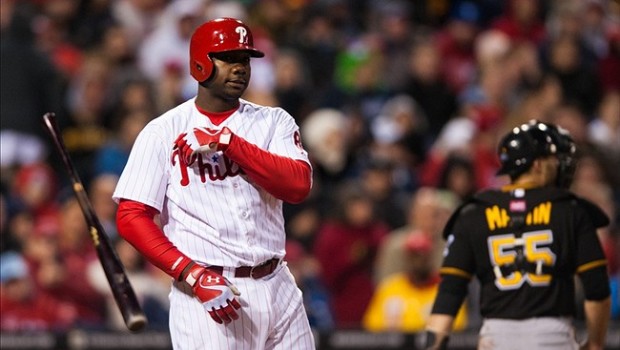 Today begins what will undoubtedly be the last Phillies spring training for the biggest piece of their recent and glorious past.

Ryan Howard is entering the final season of a five-year, $125 million contract. He will make $25 million this season, plus he is expected to receive a $10 million buyout on a 2017 club option.

The Phillies have been trying to trade him for the past of couple years, but they’ve been unsuccessful despite agreeing to pay most of his salary. And one offseason after he was involved in a lawsuit with his family, Howard is suing the TV network Al Jazeera following a December report that linked him to performance-enhancing drugs.

Conversely, Darin Ruf’s 1.107 OPS against lefties would have tied Nelson Cruz for the best in baseball, if he had enough plate appearances to qualify.

“Ryan might have a big year this year and get another contract for all I know,” said Mackanin, when asked why Howard deserves playing time on a rebuilding team. “I’d like to see that happen, because if that happens, we’re going to be a much better team.”

Howard showed up at camp Saturday to drop off a few things at his locker. He took his physical yesterday and worked out with the team before its first official full-squad workout today.

“It was good to see him,” Mackanin said. “I knew he would come in in shape, and he had a big smile on his face as usual. He’s ready to go. The thing I like most about Ryan is he posts up every day. He comes to play.”

How much playing time could Ruf see this season?

“At this point, knowing the personnel we’re going to have on the field, his best chance right now would be against left-handed pitchers,” Mackanin said. “I don’t foresee any way to play him on a daily basis. However, with an injury, a trade, anything might happen. I’d like to get him 500 at-bats against all pitchers, but at this point, it doesn’t look likely unless there is an injury.”

Mackanin will address the team before today’s workout. It will be his first spring training address as a big league manager.

“I’m formulating that right now,” said Mackanin when asked about what he might say. “Try to win as many games as you can. Basically, compete and give it your best shot. The best man’s going to win. … You know, I gave a motivational speech one time and I got carried away and then the bell went off and I realized I forgot to practice. My speech went so long that we didn’t do anything. It was a good speech though. So I’m going to keep it short and sweet.”