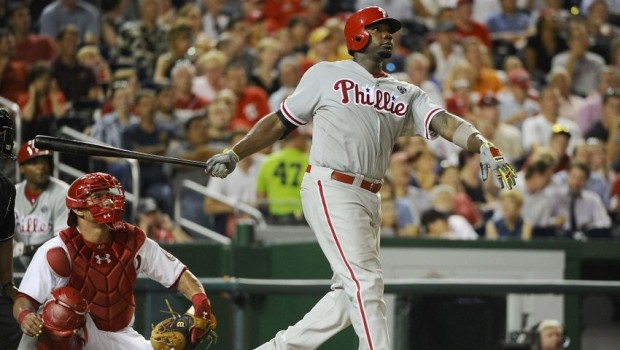 Welcome to the winter of Ryan Howard’s discontent.

His general manager has publicly said the Phillies would be better off without him.

No team will seemingly accept him, even as the Phillies offer to pay the remaining $60 million on the deal GM Ruben Amaro Jr. gave him even though he didn’t have to.

So Howard showed up in Clearwater yesterday, and according to CSNPhilly’s Jim Salisbury, took batting practice and was all smiles, but turned down the opportunity to speak with reporters after cordially greeting them post-workout.

“It’s good to see Howie in camp,” Sandberg told Salisbury. “He looks real good, looks to be in good shape. It’s a new season, a fresh year for him.

Finding a suitor for the 35-year-old first baseman with declining production the past several years has been impossible. In all likelihood, that means this marriage of inconvenience has no end in sight, unless the Phillies pick up a significant portion of the remaining money on Howard’s contract.

“We’ve talked to Ryan,” Amaro said in an interview with 97.5 The Fanatic’s Mike Missanelli in December. “And I told him that in our situation it would probably bode better for the organization not with him but without him. With that said if he’s with us, then we’ll work around him. We’ll hope he puts up the kind of numbers that we hope he can and we’ll see where it goes from there.”

Amaro has since apologized for the comments, but that likely does not change how the organization views Howard, or their desire to move him as part of the current rebuild.

“That did not come up,” Sandberg said according to Salisbury of whether or not he discussed the first baseman’s future with Howard. “He’s a professional and like everyone else he’s in camp to get ready for a season, get in the best shape possible, and get ready to go to help us win. Whatever else happens is on the business side of things and there’s nothing you can do about that.”