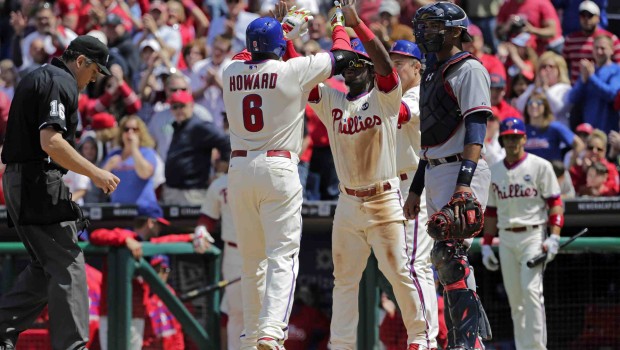 RYAN HOWARD HEATING UP AND PHILLIES ARE BIG BENEFICIARIES

Howard hit a three-run home run against Braves right-hander Trevor Cahill in the first inning of Sunday’s 5-4 victory over the Braves at Citizens Bank Park, helping the Phillies to their second series victory of the season. Howard hit his first home run of the season Tuesday and his second Saturday, giving him three home runs in his last five games.

“That’s baseball,” Howard said. “You just continue to go out there and swing. I feel like I’ve been swinging it well. The results may not necessarily show, but it’s all about how you are feeling with the swings. Eventually, they will drop.”

Howard went 0-for-4 Friday, but he made good contact and had a solid approach in each of those at-bats. Phillies manager Ryne Sandberg predicted a good game Saturday, and Howard came through.

It appears the at-bats have been carrying into the next day.

“He’s made real good strides as far as contact,” Sandberg said. “[Sunday], it was key for him off Cahill to lay off some breaking stuff down in the dirt. Made him come to him with strikes, and so I think Howie is a guy that can hit the ball when it’s in the zone. He’s in a good groove, making good progress.”

Howard not only struggled offensively early, but Sandberg dropped him from fourth in the lineup to seventh.

Since being bumped from the cleanup spot April 17, Howard has hit seventh three times, sixth twice and fifth four times.

“Not really,” Howard said, asked if the drop in the lineup motivated or relaxed him. “It’s baseball. You are going to have ups and downs in this game.”