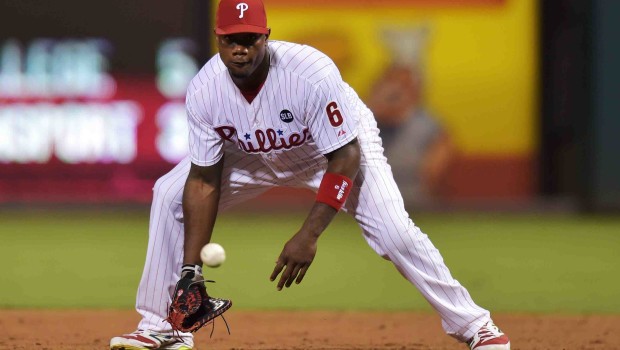 RYAN HOWARD GETS A BIG PIECE OF BLAME AS PHILLIES SINK

The Phillies are sinking like a rock in the standings with the worst record in baseball, and the last big piece of the team’s great run from 2007 to 2011 gets a lot of the blame:

Teheran (10-7) gave up one run and four hits to help Atlanta take two of three and avoid tying the Phillies for the worst record in the majors. The Braves had lost 12 in a row and 19 of 20 before coming to Philly.

”That’s definitely the Julio Teheran everybody used to know,” Teheran said. ”I know it’s the end of the season, but I want to finish strong.”

Michael Bourn had four of Atlanta’s season-high 18 hits. Bethancourt and Hector Olivera each had three hits. The trio entered the game batting a combined .170 (37 for 218).

Teheran escaped a bases-loaded jam in the seventh, blowing a 95 mph fastball past pinch-hitter Andres Blanco to end the inning. He’s 3-0 against Philadelphia this season.

”Every time I come here, it reminds me when I made my debut,” said Teheran, who lost his first career start in Philadelphia on May 7, 2011.

Asked if he considered pulling Teheran in that spot with the bases loaded, Braves manager Fredi Gonzalez joked: ”Have you seen our bullpen?”

Phillies starter David Buchanan (2-8) allowed four runs and 10 hits in 3 1-3 innings in his first start since Aug. 11. His ERA rose to 9.11 and he has allowed 22 runs and 31 hits in just nine innings over his last three starts.

”I’ll keep taking the ball and try to give my team a chance to win,” Buchanan said.

Bethancourt led off the fourth by lining an opposite-field homer to right for a 2-1 lead. Freddie Freeman’s two-run single made it 4-1.

The Braves had six hits in the first three innings, but only one run on Nick Swisher’s double-play grounder. Bourn’s two-run triple in the eighth capped the scoring.