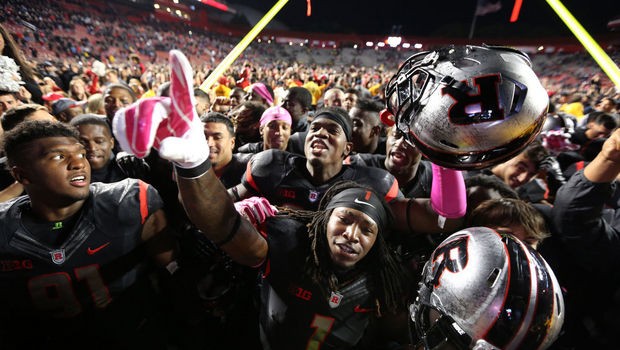 On a Saturday when more Top 10 college football teams got beat than any day in history, Rutgers made its way into the record book by beating Big Ten rival Michigan 26-24.

True, Michigan is a shell of itself, coached by a man who looks and talks like Gumby, but in the Big Ten a win is a win.

Rutgers’ second Big Ten game was not unlike its first: a tradition-rich college football powerhouse, a raucous capacity crowd, a lead for much of the game.

And then, in the time it takes to read this sentence, Michigan had rallied from a 26-17 fourth-quarter deficit, threatening to take the lead as it set up for a long field goal in the waning minutes.

It had all the makings of the 13-10 gut-punch at the hands of Penn State three weeks ago until Kemoko Turay jumped high in the air to bat down a 56-yard field goal attempt, preserving a 26-24 triumph that figures to live for the ages.

“It’s something you remember forever,” Rutgers quarterback Gary Nova said after throwing for a career-high 404 yards and three touchdowns on 22-for-39 passing. “The reason why you play college football is for moments like that.”

When it was over, after the Scarlet Knights (5-1, 1-1) moved within one victory of bowl-eligibility with their first Big Ten win, thousands of black-clad fans stormed the field to soak in the celebration.

“We had a fan base out there that was just hoping for this one right here,’’ Rutgers linebacker Kevin Snyder said. “They wanted it three weeks ago. We didn’t come through obviously. They got what they wanted. They got what they deserved tonight. We got a win. The team came up huge in the fourth quarter. We got the stops when we needed, first downs when we needed. Those were the two things we couldn’t do three weeks ago. We got them both tonight, and then the fans got exactly what they wanted. They got to storm the field and had a great night.’’

Asked to describe his emotions, Kyle Flood called it “a little overwhelming.’’ The typically even-keeled Rutgers coach said: “I think I’d be a little disingenuous to tell you it’s not. Football games in general are very emotional I think for the coaches. You put so much into them, but to have one like that and finish the game with the ball, I was just really excited for the players. There were a lot of players on our team that came to Rutgers and represent our university and our state for games like that. I couldn’t be more excited for them right now.’’