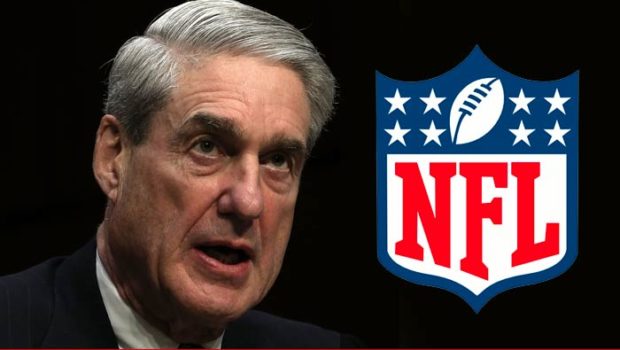 If the guy in the photo above seems familiar to sports fans, it should!

Robert Mueller yesterday was named by the Justice Department to be a special counsel overseeing the investigation into possible Russian meddling in the 2016 election as well as potential ties to President Trump’s associates.

Mueller’s name is already well known in the world of sports after he was hired by the NFL to look into the league’s handling of former Baltimore Ravens running back Ray Rice.

In February of 2014, Rice running back and his then-fiancée, Janay Palmer (now Rice), were involved in a fight on an elevator at an Atlantic City, N.J., casino. A video surfaced of Rice dragging Palmer out of the elevator as she appeared to be unconscious. Rice was accepted into a pretrial intervention program, and an aggravated assault charge against him was later dropped. In July, NFL Commissioner Roger Goodell suspended Rice for two games.

In September, a video from inside the elevator was released by TMZ Sports, showing Rice punch Palmer. Shortly afterward, Rice was cut by the Ravens and suspended indefinitely by the NFL. That same month, the Associated Press reported that an unnamed law enforcement official claimed he had sent the NFL a video of Rice punching Palmer and played a voicemail message from an NFL office number on April 9 confirming the video had arrived. But the NFL said it had “no knowledge” that anyone in its offices had received such a copy in April as claimed.

On the same day as Goodell’s response, Mueller was hired to lead the investigation into the league’s handling of the case.

Mueller, who led the FBI from 2001-13, took almost four months from the announcement of his appointment to release his findings. He interviewed Goodell and more than 200 other people.

On Jan. 8, 2015, Mueller released a report saying that his investigation “found no proof anyone at the league office received or viewed a video of Rice punching out his then-fiancée at an Atlantic City Casino until the footage became public.”