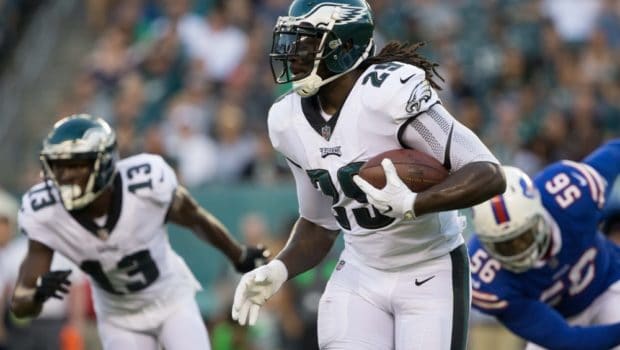 RUNNING BACK BY COMMITTEE! WHY THE EAGLES KICKED THE CAN DOWN THE ROAD!

As Geoff Mosher writes on FanRag:

The Eagles can talk about their draft-and-develop approach as much as they want, but keeping Darren Sproles and three other young running backs — Donnel Pumphrey, Corey Clement and Wendell Smallwood — also tells you about their uncertainty going forward regarding LeGarrette Blount’s ability to shoulder the workload.

The team wasn’t about to wait until after this Sunday’s season opener on the road against Washington to add reinforcements.

The 30-year-old Blount (above) averaged just 2.8 yards per carry this preseason. He had 299 carries last season for the New England Patriots, so there was already reason for skepticism when the Eagles signed him shortly before OTAs, given his aging and the prior season’s wear and tear: